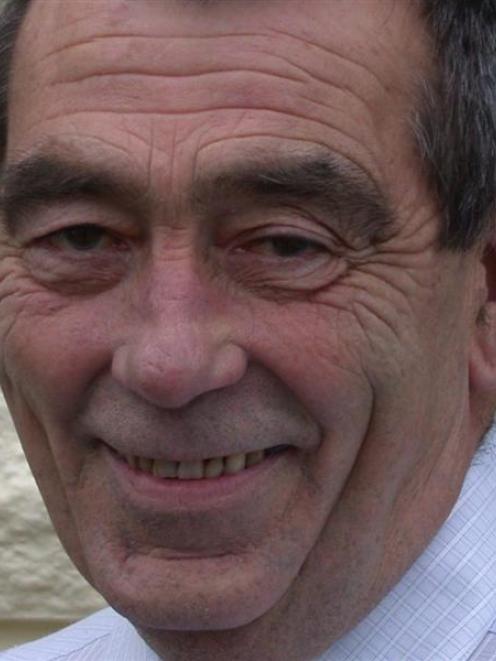 Bill Dean.
The cost of closing Oamaru's historic courthouse has been more than double what an Oamaru-commissioned report says it would cost to strengthen it to 100% earthquake standards.

Figures obtained by the Otago Daily Times under the Official Information Act show the Ministry of Justice has spent about $600,000 on temporary court facilities, maintaining the closed courthouse and starting a sale process.

Assessment reports and a strengthening analysis of the 132-year-old building adds another $200,000.

Independent reports commissioned by Oamaru lawyer Bill Dean estimated it would have cost up to $350,000 to strengthen the building to new-building standard.

The Oamaru courthouse, with a rateable value of $600,000, was closed in November 2011 because it was deemed an earthquake risk.

At the time, the Ministry of Justice said it would be strengthened within a year.

Another report then estimated it would cost up to $6 million to strengthen the Oamaru stone building - a cost ridiculed and disputed by the Oamaru community.

Mr Dean lobbied to have the historic Oamaru Courthouse kept in use, going so far as to fund an independent engineering and surveying report which disputed the Government's $5 million to $6 million cost estimate for strengthening work.

He had Dunedin engineer Lou Robinson and a local surveyor assess the building and cost strengthening it to 100%.

The independent findings also revealed that the issues with the building were not ''hugely structural'' and largely cosmetic, he said.

Those reports were sent to the Ministry of Justice in 2013.

''I could see absolutely no reason why Lou's report would not be accepted,'' he said.

''[But] that just seems to have been ignored.''

The Ministry of Justice also revised its assessment, and the cost of earthquake-strengthening came in at between $1 million and $2 million, still too high for a court open for business less than one day each week, on average, the ministry said.

As a result, ownership of the central Oamaru building was transferred to Land Information New Zealand for management and disposal.

The 132-year-old Oamaru courthouse was designed by the noted architectural partnership Forrester and Lemon. It has been described as their finest work and the ''jewel in the crown of provincial courts''.

Since August last year, Oamaru court proceedings have been carried out in the considerably less salubrious setting of a Portacom building in an Oamaru car park.

The temporary facility in Humber St, on which the ministry has already spent about $400,000, has been problematic since its opening.

Space issues once forced some lawyers to interview clients in the car park and probation officers to see clients in their personal vehicles.

The temporary court facility has since had additional space added.

It was also temporarily closed earlier this year after air quality problems allegedly made staff unwell.

''It was just a nightmare and it remains so,'' Mr Dean said of the temporary facility.

He believes the old courthouse could have been strengthen ''very quickly, possibly without even having to leave it''.

Now, he said, the cost to the ministry would be far more than what it would have cost to have the building properly assessed and strengthened.

''They've backed themselves into a corner,'' he said.

The Ministry of Justice announced last year it was committed to keeping court services in Oamaru.

''In the meantime, these services will continue to be provided at the court facility on Humber St,'' he said.

Mr Gibbs said he was aware of the estimated costs of strengthening provided by Mr Dean.

''However, we took advice from a panel of engineering experts, including those with specialist knowledge of Oamaru buildings, when we established the appropriate cost of strengthening the courthouse building,'' Mr Gibbs said.