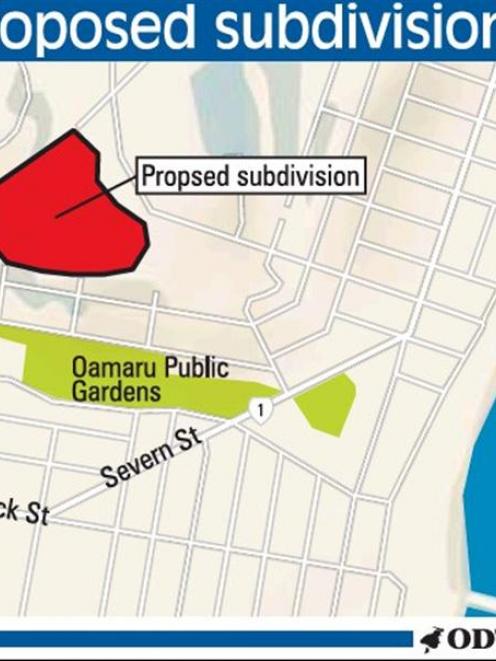 A 108-section residential subdivision with sweeping views over Oamaru and its coastline has been sped up by the Waitaki District Council because of strong interest from potential buyers.

In part, that has been caused by residents of Christchurch looking at relocating after last month's earthquake.

The council owns 14.2ha on "hospital hill" at the rear of the former Oamaru Public Hospital and last year announced plans for a residential subdivision which will have views over Oamaru, the North Otago coast and inland to the Kakanui Mountains.

Now, the council is moving ahead to get the first stage of 22 sections on the market, possibly by Christmas, property manager Dougall McIntyre said yesterday.

About half a dozen prospective buyers have already inspected the area. Mr McIntyre estimated at least half of them were from Christchurch.

"Public interest in this development is strong, particularly in light of the events in Christchurch, as the site is considered stable," he said.

By the time sections go on the market, the council will have had four geophysical reports on the site, on a hill above Eden St.

The first stage for development would be off Stoke St, using existing services.

Mr McIntyre could give no indication of section prices until detailed design was completed and they went on the market, but last year indicated "aspirational prices" above $120,000 - about the norm for sections with views and sun in Oamaru.

A full survey is being carried out which will lead to a final design for the subdivision, including roading and underground electricity and other services.

"That is progressing rapidly and we hope to complete that in four to six weeks," he said.

The council is proposing a subdivision with housing clusters, interspersed with green spaces.

The land to be developed consists of 7.96ha purchased from Ngai Tahu in June last year and the rest is freehold land owned by the council.

It has also involved an agreement with a neighbour for modifications of boundaries and the exchange of a portion of reserve land for some of the freehold land, which will need public consultation.

The original proposal was for sections ranging in size from 800sq m to 1450sq m, with an average size of 955sq m depending on the final detailed development plan.

Three further stages are planned, depending on market demand.

While the subdivision is divided into stages, it is being planned as one cohesive development.

Part of the skyline walkway around Oamaru is across the site and will be incorporated into the subdivision.