Urged to take up benefits of UFB 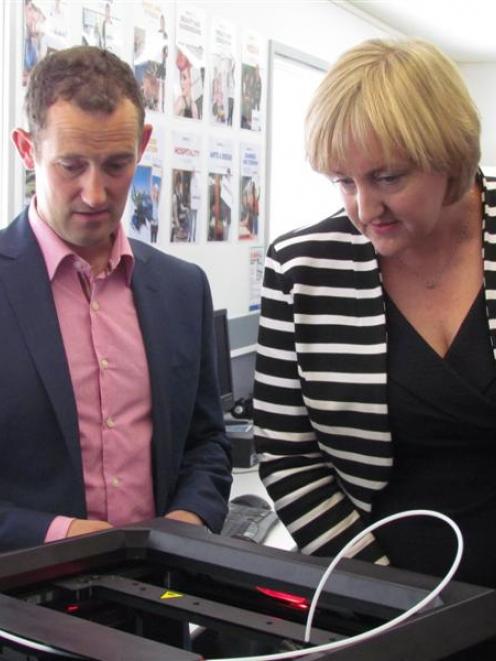 Communications Minister Amy Adams inspects a 3-D printer with Richard Spackman from Heartland Ricoh at the Aoraki Polytechnic Oamaru campus yesterday. Photo by David Bruce.
Oamaru has to grasp the opportunities offered from being the first town in the South Island to have its ultra-fast broadband fibre network completed, Communications Minister Amy Adams and Waitaki Mayor Gary Kircher said yesterday.

A ceremony at the Oamaru campus of the Aoraki Polytechnic marked the end of the project, which started in December 2012, and made Oamaru the third town in New Zealand to be completed.

This included eight schools connecting to fibre, seven of which had already joined up to the Government's Network for Learning.

Ms Adams said having the fibre in the ground meant nothing if it was not used and used well.

''The community now needs to think about how Oamaru is going to use it to transform the future,'' she said.

''It is the most exciting opportunity you have.''

Waitaki Mayor Gary Kircher said the community wanted to grab the opportunities the broadband offered and run with them.

Chorus chief executive officer Mark Ratcliffe said Oamaru was in the enviable position of getting a head start on the rest of New Zealand.

To help the Oamaru community make the most of fibre, Chorus would work with the local council, communities and the industry to build on the benefits fibre could deliver.

Oamaru businessman Nicolas Erdody said ultra-fast broadband had completely transformed his business, Open Parallel, which was involved in designing a software platform for the largest IT project in the world, the Square Kilometre Array radio-telescope (SKA).

SKA teams were spread all over the globe and Mr Erdody said connecting to ultra-fast broadband has given him a significant advantage.

''When you are talking at the same time with people in the United States, Europe, South Africa and Asia, you need the best speed and quality connection. Before I had ultra-fast broadband, it was impossible to have simultaneous Skype conversations.''

It had even become a marketing tool.

''Overseas clients love to hear that I'm working from a small, rural town on the other side of the world. I don't need to be in the usual places such as Silicon Valley or London,'' he said.

Minister Amy Adams said the Government was committed to building world-class fibre infrastructure in regional towns around New Zealand because of the long-term gains it would bring.

''Faster broadband is critical to growing the economy, driving innovation and improving outcomes in education, health and the not-for-profit sector,'' she said.

The Oamaru campus could now connect to the Timaru, Ashburton and Christchurch campuses via video conferencing, which meant students could access courses and tutors not previously available in Oamaru.