More than 200 people, the majority from St Kevin’s College, joined Zara’s family and friends at a Maori blessing at the Oamaru skate park that borders State Highway 1, where she was struck.

Speaking after the ceremony, Zara’s mother Wendy Blackie said her daughter would have been proud of those who came along.

"She would have wanted to be out there [with the crowd]."

St Kevin’s principal Paul Olsen spoke to the crowd telling them Zara was an "energetic and vibrant young lady".

"To see her potential cut short is a tragedy. The college community is in mourning, but I thank the wider community for the support they have extended at this time of great loss."

Speaking on behalf of the family, Sergeant Tony Woodbridge, of Oamaru, said the fact so many people turned out to honour the memory of Zara "means a huge amount to them". 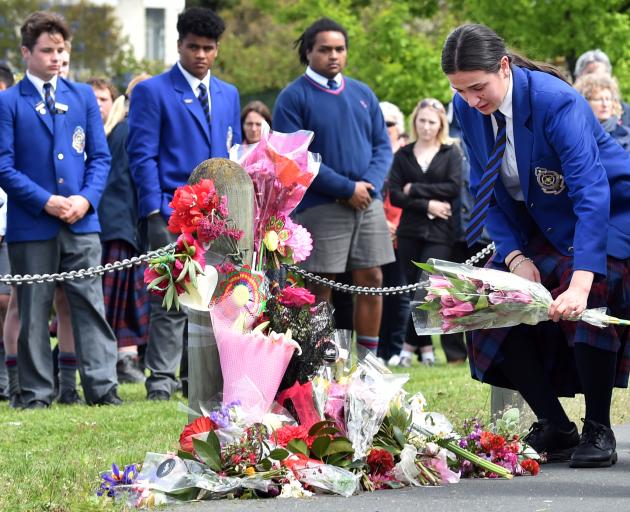 A St Kevin’s College pupil lays flowers at the scene.
He also thanked members of the public and emergency services who were at the scene at the time of the incident and "did their darnedest to get your girl back".

Several school pupils laid flowers at the scene, among others that had been laid in the days immediately after Zara’s death. Zara’s funeral will be held at the St Kevin’s College chapel at 2pm on Monday.

On Wednesday, a 30-year-old Oamaru man was arrested and charged with failing to stop to ascertain injury as a result of the crash.

He will appear in the Oamaru District Court at a later date.