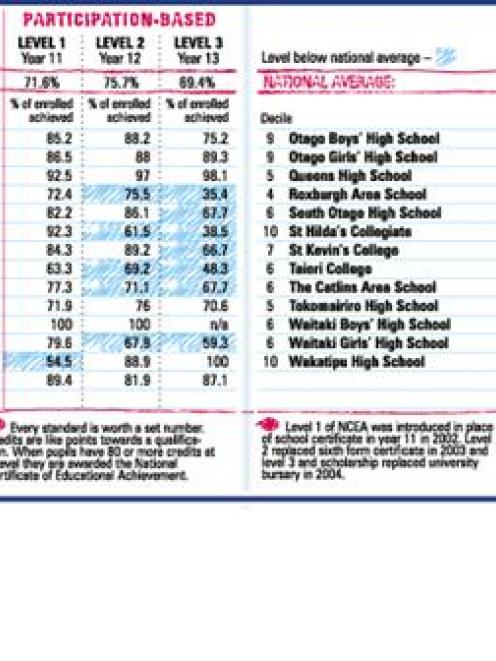 Roll-based statistics released by the New Zealand Qualifications Authority this week show the number of secondary schools in the region matching or beating the national average pass rate in the qualification is increasing.

Participation-based statistics, introduced in 2008 and based on the number of pupils enrolled in NCEA levels, mirrored the decrease in below-average schools.

There may have been some "teething problems" with NCEA, but the region had embraced it and pupils were more aware of what they had to do to achieve, he said.

The increasing number of level 3 pass rates was a "success story" for Otago.

However, the level 2 obtainments were not following the same trend.

Seven schools failed to meet the roll-based national average pass rate of 65.4%, compared with four in 2008 and three in 2007.

Level 1, on the other hand, remained steady, with the majority of schools achieving at least the national average of 63.9%.

Decile 10 girls' schools in Dunedin continued to come out on top by recording admirable pass rates.

Lawrence Area School gained 100% pass rates for both level 1 and 2.

However, the roll for each level was nine and four pupils respectively.

The Catlins Area School also gained a 100% pass rate in level 1, with the 14 pupils enrolled in the level gaining the qualification.

Deputy qualifications chief executive Bali Haque said the statistics assisted schools and teachers in their planning and any comparisons between schools should be treated with caution.

Schools designed their courses and qualifications for pupils differently and the public should be aware of factors such as decile, roll numbers and courses offered which would influence statistics, he said.