Arrowtown pair 'stoked' to be in grand final 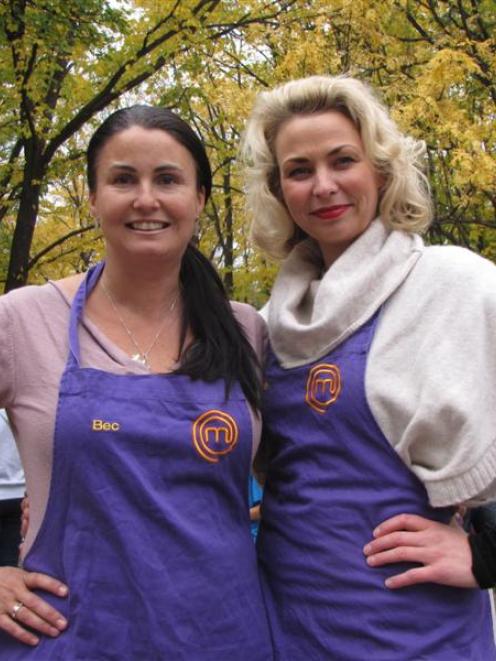 The pair eliminated mother-daughter duo Nicola and Jordan Shearer, of Lower Hutt, with scores of 9/10 for Sunday's challenge and 7/10 for last night's duo of beef challenge.

They join the Bird sisters, Kasey (23) and Karena (25), of Maketu, in the final, to be broadcast next Sunday.

Ms Stanley (40) said it was an ''absolute privilege'' to be in the final considering the calibre of contestants.

Ms Stodler (36) said she ''thought from the beginning we had what it took to get to the top two''.

The pair told the Otago Daily Times yesterday they were taking television stardom in their stride while juggling their business interests and young families.

The Arrowtown team is sworn to secrecy by the programme's producers, but fans still ask them what is going to happen as the grand finale of the fifth series of MasterChef New Zealand draws near.

''It's very easy to forget the cameras are there and it becomes an everyday occurrence to have a cameraman in your face, a microphone strapped to your shirt and judges screaming at you,'' Ms Stanley said, with a laugh.

''It makes us out to be quite serious and competitive people, but Jaimie and I were just the biggest jokers on the show and we had so many laughs with the judges, but it hasn't shown any of that.''

Ms Stodler said there were two days of filming to make an hour programme and the experience differed from what was presented to viewers, but it was still entertaining to watch.

''We had to laugh our way through it because there were moments which were so ridiculous, so we've been a bit surprised we've come across as more worked up than we were,'' Ms Stodler said.

The friends described working together as ''brilliant fun'' and picked each other's spirits up when needed.

Their culinary skills complemented each other as Ms Stanley said she was ''a savoury person'' and Ms Stodler ''a sweet person'' and they were quickly able to bounce dish ideas off each other.

They hosted a party with their family and friends to watch the first episode, but the two mothers have young children and the transmission time is past their bedtimes, making it difficult to get together regularly to watch.

However, the three Stanley boys are excited to watch their mother on TV, although Ms Stanley said she finds it ''quite embarrassing''.

Ms Stodler said she was ''super hyper critical'' of herself on screen at first, but she is almost used to it now.

''It's exciting for everyone, including us, because part of us not knowing what the editing is going to do means we also don't know what's going to happen.''

The cold starter was a beef tartare with oysters and pickled vegetables, while the hot main was a piece of roast Taupo beef rump with crispy bearnaise sauce and onions two ways.

The competitors tackled a variety of processes - pickling, marinating, sous-viding, deep-frying, roasting, making a sauce and crackling - within only 90 minutes.