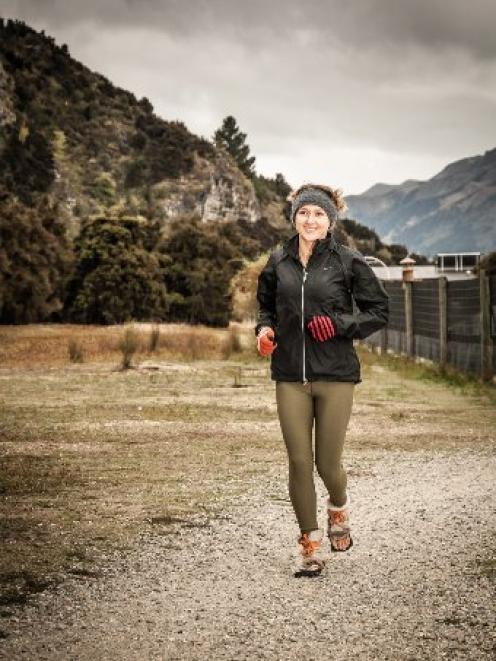 Ange Connell trains for the Routeburn Classic. Photo by Simon Williams.
A Wanaka woman will today run the Routeburn leaving only the smallest of footprints, writes Gina Dempster.

For most people, running the Routeburn would be enough of a challenge. But Wanaka woman Ange Connell is combining the physical adventure with a re-use mission.

When she competes in the 2014 Routeburn Classic today, everything she wears will have been sourced from second-hand shops, mostly from Wanaka Wastebusters, or made by herself.

Her running outfit does not look that different, until you look at her feet. Ange runs in home-made ''shoes'', cobbled together from mountain bike tyres, rabbit fur and cord.

The race-day shoes are version six of a prototype Ange started developing after she embraced barefoot running at the start of this year. Prior to that she had been running longer distances in traditional running shoes, since travelling in South America in 2012.

''I hadn't done any running since high school, but I was pretty fit because I'd just done a three-week trek.

"One day I just decided to see how long I could run for, and I ran for three hours. That just blew me away, and I started running regularly to explore the small towns, and the mountains and forests around them.

"When you're running, you're going at such a slow pace, you can really connect and engage with people, compared to driving past on a bus.''

Ange completed the Dunedin marathon last year, but had been struggling with tendonitis and pain in her hips and lower back during long runs.

She had to use painkillers to get to the finish, and although she was happy with her time, she could not walk the next day or run for a couple of months afterwards.

After reading Born to Run, the best-seller by barefoot-running proselytiser Christopher McDougall, she tried running in a pair of really basic flat shoes, when she returned to running just before Christmas.

She noticed improvements in her posture and stability, and her lower leg, hip and back pain disappeared.

Ange started thinking about the way in which running shoes and high-tech outdoor clothing acts as a barrier when we go out into the natural environment.

''We get so obsessed with protecting ourselves from the environment, rather than adapting to it and being part of it,'' she says.

When she entered the Routeburn Classic, she decided to take a personal stand against commercialisation of outdoor experiences.

''It's so easy to get intimidated by how much new stuff you need to compete in something like this. I wanted to show that you can do an event with minimal impact, on the environment as well as on your own body.''

Ange found her gloves, hat, tights, running singlet and the mountain bike tyres for her ''shoes'' at Wanaka Wastebusters.

''Wanaka Wastebusters is an absolute model of facilitating the extended use of second-hand goods.''

Ange says she loves the sense of community and sharing and trading you get from buying things second-hand.

''Giving someone else's stuff a new life, I really, really enjoy that. It's the same kind of feeling I get from running, that it's exciting and an adventure.''

As part of the recycling crew cleaning up the Rhythm & Alps festival held in the Cardrona valley at New Year, Ange was shocked by the amount of waste left behind by the festival-goers.

''Seeing the overwhelming amount of discarded goods - it really hit home to me that even in `clean green New Zealand', we have a lot of educating to do about being responsible for the products we buy new.

''Being a responsible consumer means understanding where a product has come from, who has made it and under what conditions, where it will end up and how it ultimately affects the health of the planet and our own lives.

"It's time we started thinking about the world as a connected community and considered the amounts of waste floating in the oceans and piling up in dumps all over the world. We can't keep pretending that rubbish just disappears when someone takes our rubbish bag away.''

Making her own shoes was not too much of a leap for a girl who grew up in a thrifty and creative household in Poolburn. Ange said her parents were great role models for making do with what you have and hard work.

''Mum was always getting second-hand things and hand-me-downs for us, and there was always a sewing machine in the house. Dad was the most influential for me with the 'do it yourself' approach, he did so much work on our house and was always tinkering in the shed.

"I loved the tool shed and because I expressed so much interest in making things he built me my very own tool box for Christmas when I was about 7 - with real tools.''

The tyre shoe prototype was made from a bike tyre and velcro, but later models included rabbit skin and softer cord to prevent rubbing and rivets to stop the cord pulling out.

Ange says the latest versions are very comfortable and give the sensation of being barefoot while protecting her feet from rocks and stones.

''I even wear them to work at the Rippon winery cellar, and I get a real range of responses. Some people love them, but one lady asked me if I'd noticed that I was wearing very odd shoes.''

One advantage is that Ange does not have to worry about her shoes letting her down during the event, because she can do any repairs herself.

She carries a needle and thread and a spare piece of bike tyre in her race-day kit, just in case.

In a world obsessed with high-tech gadgets, Ange says it is important to take opportunities to put technology down and connect with the environment.

''The thing that bugs me the most is the disconnection between people and the environment.

"I cringe when I see people attached to their phones and cameras and seeing world through technology, instead of really engaging - touching the grass, smelling the leaves ... or wriggling their toes in the dirt.

"Simply by taking your shoes off, you can feel more connected to the world we live in, and move in a softer, simpler way.''

Gina Dempster is a communications adviser at Wanaka Wastebusters.

Ange's tips . . . ... for minimal-impact running:
1. Don't buy anything new - use what you have in your wardrobe, swap with friends and shop in op-shops.
2. Strengthen your feet by using them - go barefoot when you can (at home or when walking on grass or sand), do yoga.
3. Read Born to Run, by Christopher McDougall, or The Barefoot Running Book, by Jason Robillard.
4. Start with short runs and work up gradually.
5. Run barefoot on grass or sand.
6. Experiment with evenly flat shoes if running on rougher surfaces.
7. Smile, have fun and play - you have everything you need right there at your ''feet-tips''.