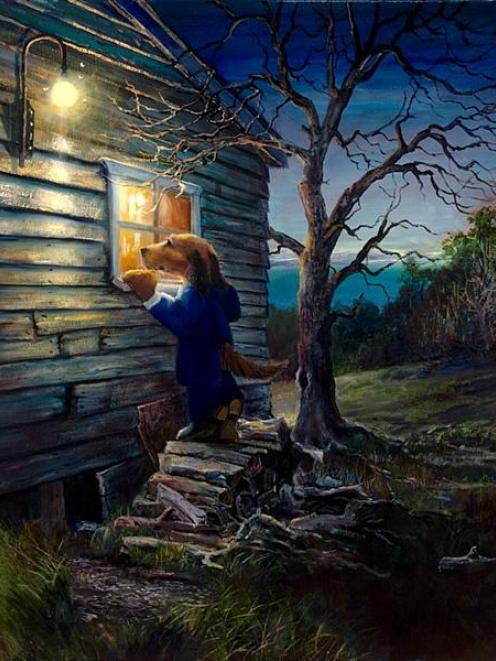 Ivan Clarke's painting of The Lonely Dog, based on his dachshund. Image supplied.
A Queenstown artist's creation is heading to the big screen following the announcement yesterday Warner Bros had acquired the screen rights to Alveridgea and the Legend of the Lonely Dog.

Akiva Goldsman and Kerry Foster will produce the movie, based on the collection of art, characterisation and story developed by Ivan Clarke, through Goldsman's Warner Bros-based Weed Road banner.

Lonely Dog began as a series of paintings and stories Clarke, a landscape artist, was creating for his children.

Clarke added partners Graham Burt and Garry Phipps, both of Auckland, who with Whangaparoa-based author Stu Duval's help, have crafted a fantasy world which has others making comparisons with the fantasy greats.

The Lonely Dog world is gathered together in a handmade book, Almalogue.

Only 95 numbered and signed copies have been made, with 70 released for sale.

"It started with [a] bang and I had no idea what I'd got myself in to," Clarke said. "To emerge at this level is a dream come true."

News of the Warner Bros acquisition spread like wildfire across the United States yesterday, with hundreds of entertainment websites running the story.

The announcement yesterday came as a surprise to Clarke and his partners, who had not planned on going public for several more weeks.

It was not yet known what form the movie would take - it was mentioned on US-based websites it would be done using computer-generated imagery, but Clarke told the Otago Daily Times it may feature more realistic animation as seen in the computer-animated Happy Feet.

Mr Burt, Lonely Dog chief executive, said he was "amazed" at the interest in the project from across the world.

"Everywhere we go, we are being compared to very exalted company.

"We have just signed a worldwide publishing deal with Atlantic Books in London, and to have this announcement [yesterday] is icing on the cake.

"We have been working on this for some time - the way I found out about this particular stage of it was my first email [yesterday] morning from a New York publisher asking me for the rights."

Mr Burt said the movie would take "years" to come together, but the Lonely Dog team - who have been working together for about three years - would be involved in the process.

Clarke said the most satisfying element was the enjoyment people had received from Lonely Dog.

"It is a world we love living and playing in and are thrilled that others do too."