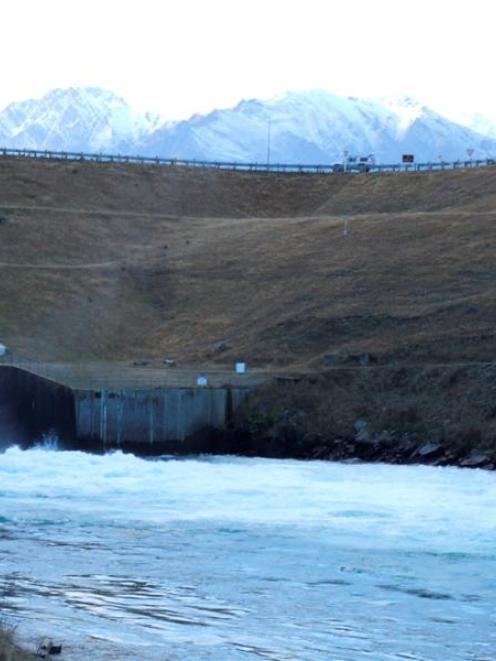 The Lake Hawea control gates and dam, above the Hawea River. Photo by Matthew Haggart.
Contact Energy has asked for more time to establish a hydroelectric scheme at Lake Hawea, citing the global economic downturn and seasonal construction constraints as reasons for the delay in exercising the project's original consent.

Contact has proposed the construction and operation of a small-scale hydro-generation facility in the outfall control structure of the existing Lake Hawea dam.

It secured an original land use consent from the Queenstown Lakes District Council in 2007 for the 17.2MW Hawea Gates Generation Project, due to lapse on February 7.

Contact also holds associated consents granted by the Otago Regional Council with expiry periods of 10 and 15 years, lapsing on various dates in 2017 and 2022. It wants to extend the expiry date of the QLDC consent another five years, to July 16, 2017, to coincide with the regional council consents.

Contact hydro-development project manager Neil Gillespie said, while Contact was "continuing to progress, giving effect to the consent", it was not possible to complete the final design and construction of the project within the current QLDC consent period.

The extension application said a combination of "technical, practical and economic constraints" were behind the delay.

The project was not straightforward as it involved "retrofitting a modern tailor-made generation plant to existing infrastructure", making the economic risks of project high, the application stated.

A final investment decision could not be made by the current lapse date, a situation "exacerbated by the global economic downturn and associated slower-than-anticipated growth in electricity demand since 2008".

Also, because initial construction work had to be performed "in-river", the project was limited by the ORC consents and seasonal constraints, which had contributed to its extended duration.

The project requires modifying the Hawea dam structure, on Contact-owned land, by constructing twin powerhouses; installing a generation plant; altering the intake structure; installing penstocks through the existing sluices; strengthening some existing works; and carrying out earthworks and upgrades to access roads.

Mr Gillespie said the extension would help achieve the objectives of the QLDC district plan and was an efficient and sustainable use of the resources.

"It's a great little project, renewable, small scale, and makes the most of an untapped resource, the water already being spilled through the dam.

"Importantly, the development involves no long-term changes to the river environment."

It would take up to 36 months to complete the final design and construction, and the expected timeframe to complete all work is no later than 2017, in line with the current ORC consents.