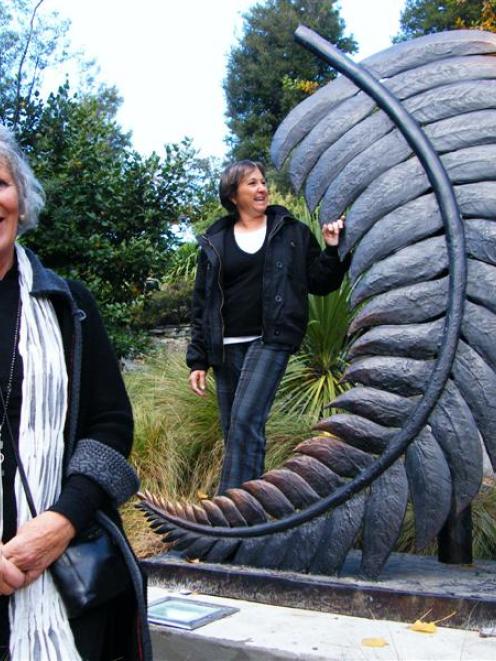 Aspiring Arts and Culture Trust chairwoman Janet Malloch (left) with trustees Jeri Elliot and Sally Middleton admire the `Fern' bronze sculpture, install in Queenstown Gardens.
Arts funding by the Queenstown Lakes District Council (QLDC) has been cut from the draft annual plan and there is no guarantee of reinstatement after 2010-11.

The Aspiring Arts and Culture Trust has been receiving $50,000 annually to allocate for works of public art in the district.

However, the draft annual plan summary document said the trust had "sufficient funds to continue to invest in public art works in the 2010-11 year."

Chairwoman Janet Malloch, of Wanaka, said she and trustees were "disappointed" with the budget drop.

"We understand the position of the council having to make changes ... but we were disappointed, because we believed we had gone about our business in the way we were supposed to.

"We're going to presume it's going to be reinstated in the next budget and continue our work.

"We have no guarantee, but the council did say it was temporary, because of the economic climate and their financial position."

In Mrs Malloch's submission to the draft annual plan on behalf of the trust, the Mt Aspiring College teacher reiterated the trust was formed to raise funds and foster the arts and cultural identity of the district for residents and visitors.

Trustees were tasked with promoting Queenstown and Wanaka as destinations for experiencing arts and cultural identity, while developing and advancing the artistic and cultural skills of residents.

Council funds were the bulk of the trust's income at 70%, with the remainder from community trusts, interest and donations.

The remainder was spent on administration and expenses, including the Otago Arts Guide Book, the Queenstown Violin Summer School and the Queenstown Arts Society website.

Mrs Malloch said she would not be standing for re-election as chairwoman but would continue as trustee.

The trust's latest purchase and installation was a $37,140 three-piece sculpture called The Peaks, by Wellington artist Rebecca Rose, on Bridgeman Green, in Wanaka, earlier this year.

Funds for the $98,000 fern sculpture were accumulated over two years.

It was bolted on to its plinth in the Queenstown Gardens in May 2009.

The QLDC meets today to consider adoption of the annual plan.