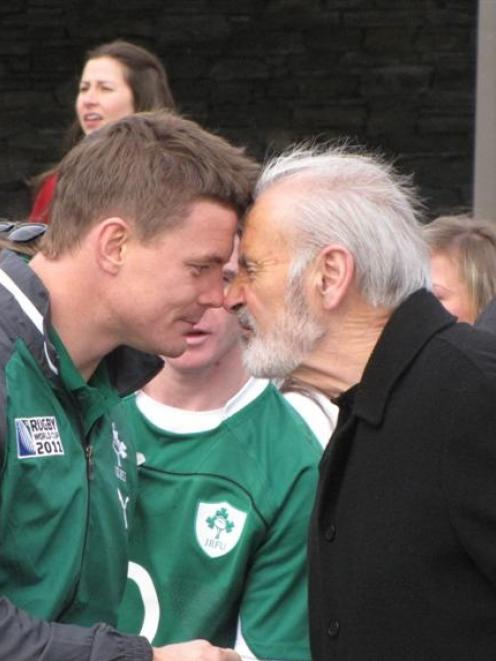 The captain of Ireland's Rugby World Cup team, Brian O'Driscoll, shares a hongi with kaimatua Michael Skerrett at Queenstown International Airport after the Irish team arrived in the resort yesterday. Photo by Tracey Roxburgh.
Rugby World Cup arrivals in Queenstown this week are "something of a wait and see", Destination Queenstown and the Queenstown branch of the New Zealand Hotel Council say.

DQ chief executive Tony Everitt said most RWC fans were expected to be free and independent travellers and so were unlikely to book far in advance.

"We are a little bit encouraged by some of the intelligence the campervan companies are saying, that they've got heavy bookings for the month of September," Mr Everitt said.

"We know we've got some teams with very large followings, like the English team in Otago-Southland for that month. That gives us hope we might see a lot of those English fans come on through, maybe in campervans or rental cars."

The hotel council's Queenstown chairwoman, Penny Clark, also general manager of Goldridge Resort, said members had not noticed an increase in bookings from English, Irish, Romanian and Georgian rugby fans and no member hotelier was expecting a bumper month of bookings.

"We envisage there's going to be the odd night. However, you haven't hired a campervan to not use it. We are expecting a blitz of campervans coming to town for the month of September.

"We're all well aware [bookings] are quite soft. Potentially, the normal September incentive business in town is displaced and skiers have been a bit erratic.

"I think we've had a good August, certainly better than we expected, if you average it out and because we've had more rooms in town."

Ms Clark said she expected i-Site visitor centres would be busy with free and independent travellers as cup fans arrived and sought information on where they could go, such as Queenstown, between games.

"Once they've settled into the country and got a feel for it, they'll start moving around," she said.

There was a question mark over how New Zealanders would spend the school holidays, given the later dates in October in line with the end of the RWC. Snow sports in the Southern Lakes were a possibility for this, or rugby games in the North Island, or thanks to the strong New Zealand dollar, a trip overseas.

"We're all feeling positive about September, in the sense that there's going to be some pick-up, but we're not sure where the pick-up's going to come from in October," Ms Clark said.

The third largest sporting event in the world was expected to attract 85,000 visitors to New Zealand during the tournament of 48 games at 13 venues, from September 9 to October 23.

The typical RWC visitor was likely to be travelling with a partner or spouse or as part of a group and would probably be more than 45 years of age with a professional career.

Up to 37% of the 85,000 tourists will have visited the country before, while 19% will be New Zealand expatriates.

Queenstown and Southern exposure in the homelands of training teams was anticipated via more than 120 accredited media representatives from England, 22 from Ireland, 11 from Romania and four from Georgia, in the first half of September.