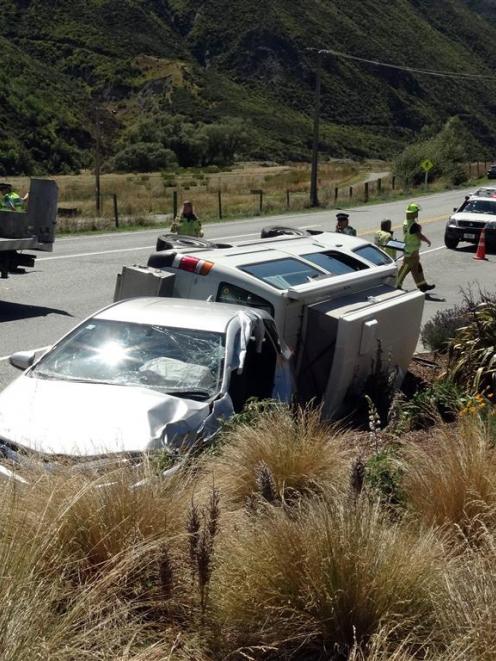 Two-vehicle collision on State Highway 6 at Gibbston near Queenstown. Photo by Paul Taylor.
Four people received minor injuries after a crash at Gibbston on Saturday morning.

The two-vehicle accident was the second last week on the 100kmh stretch of State Highway 6 through the wine valley.

Firefighters were called to the junction with Gibbston Valley Winery about 11am. One person had to be extracted from their vehicle.

‘‘A privately owned camper van heading towards Queenstown collided with a car turning into the winery.

‘‘One lady had to be extracted. She's wasn't trapped but was uncomfortable so we popped the doors off.''

The 15-minute operation involved about 25 members of the emergency services, including the Arrowtown, Frankton and Queenstown brigades, along with police and St John. Both vehicles sustained significant damage.

They spun together in the crash and ended up wedged against the winery's stone wall.

All four people involved were believed to be tourists.

On Tuesday, six cars were involved in a shunt accident about half a kilometre down the road near the bungy bridge. No-one was injured.

Clark said: ‘‘There's been a few [accidents] in recent years and a couple in the past month; just people not paying attention on the roads.''

● An animal on the road is being blamed for a car rolling on State Highway 6 between Queenstown and Kingston on Thursday night.

Sgt Haggart, of Queenstown, said the driver, a 23-year-old man, swerved to avoid an animal and lost control when the car hit gravel near Wye Creek at 10.30pm.