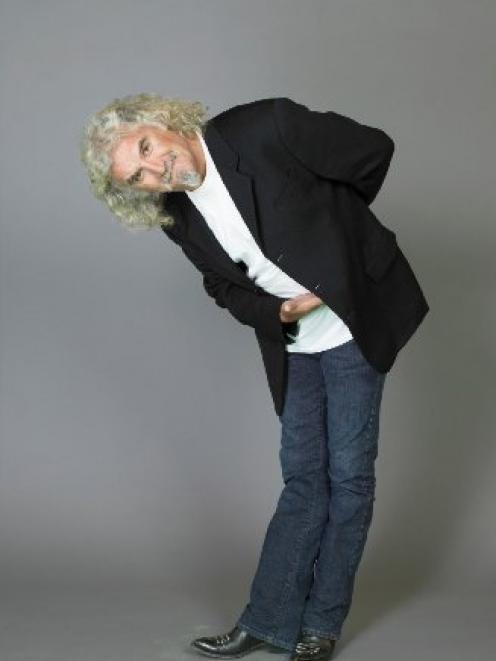 Glaswegian comedian Billy Connolly rides his High Horse Tour to Queenstown tomorrow and Dunedin on Wednesday. Photo supplied.
Scottish comedian and actor Billy Connolly's first stand-up shows in Otago in five years are on course to be a sell-out in Queenstown, with ticket sales ''extremely heavy and only a handful left'', while Dunedin has already sold out.

Staff at the Queenstown Events Centre are now turning their full attention to the Big Yin's southern excursion after a successful Queenstown Blues and Roots Festival on the cricket oval last Saturday.

Queenstown Lakes District Council community facilities manager Michael Homan said staff were ''very confident'' the Queenstown show would be a full house, even though capacity would be boosted to 1950 seats, 100 more than for the previous major indoor concert, the Flight of the Conchords, in June 2012.

''Our preps at the moment are around the basic operational issues we're getting in place, like engineer's check-offs of weight loadings from the roof and that sort of thing,'' Mr Homan said.

''It's a full production from our end - audio, lighting and stageworks.

''We're quite excited about it and we've got our preparations well under way for it.''

Dunedin Venues event manager Ruth Mackenzie-White said the Dalai Lama's visit in June last year was the previous show before Connolly's to sell all 2200 seats in the Dunedin Town Hall. Staff will be sure to point out his signature in the guest book to the comedian.

''There haven't been tickets available for the last few weeks, so it was a great sign to us about how popular Billy is in the region and the fact that not all shows sell that quickly, so that was good news to the promoter and everyone,'' Ms Mackenzie-White said.

''We're just working through his technical requirements as we go along.''

Connolly is bringing his High Horse Tour to 12 New Zealand centres, including Queenstown Events Centre tomorrow and Dunedin Town Hall on May 7.

The new start time at all venues will be 8pm and not 7.30pm as previously advertised.