Grandmother in marathon for mental health 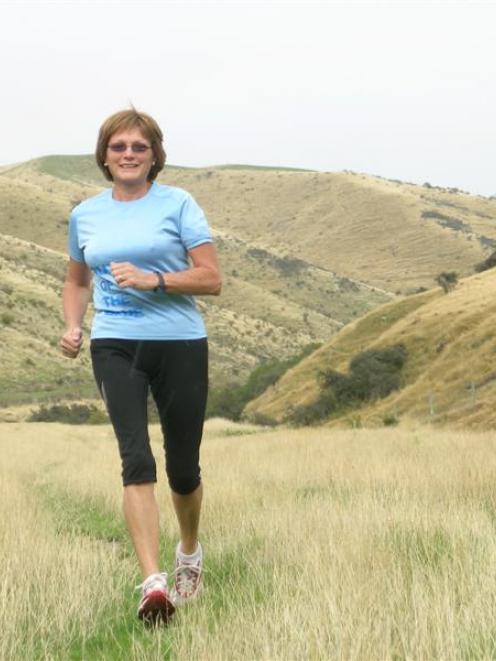 Cardrona farmer Anne Scurr (59) trains yesterday for her first marathon, the Motatapu Icebreaker, to be held on Saturday. Photo by Marjorie Cook.
Beating depression requires commitment, effort and strength - all the characteristics of a marathon runner, Cardrona farmer and mother-of-three Anne Scurr says.

To prove her point, the 59-year-old grandmother is running her first marathon on Saturday to raise awareness of depression and fundraise for the Mental Health Foundation.

Mrs Scurr was motivated to start training for the Motatapu Marathon six months ago to celebrate the recovery of her son, Don, from depression.

Her family had noticed people seemed to keep quiet about depression and there did not seem to be much acknowledgement of the huge efforts people went through to recover their health and live a full life.

"My son was very sick with depression two years ago and we were really blown away by how many people have depression, once you become aware of what's going on . . . Don made a great recovery. He's worked really hard. This is a celebration of his good health," Mrs Scurr said.

When Mrs Scurr's niece, Lisa Collins (36), of Queenstown asked if she would run the Motatapu marathon with her, she decided to use it as a fundraiser and has collected nearly $2000 so far.

Mrs Scurr played hockey as a pupil at Timaru's Mercy College in the late 1960s and many years ago walked two half-marathons. More recently, she took up hill-walking with her husband, John, and joined the active Cardrona Go Girls, a group of women who enjoy outdoor activities and sports.

But she never thought she would ever run a marathon.

"I hadn't run to the mail box before. I went from the couch to the marathon. That seems to be my way - I dive in the deep end."

Mrs Scurr would love to see her contributions go towards helping people with depression get active again.

"I am sure it would help. I haven't any medical background to say that, but I am sure it [exercise] helps. Joining a gym or doing a marathon is expen-sive, but to commit to something will give them a focus in their life. It raises endorphins and you feel so much better."

Training for a marathon was a process of highs and lows, not unlike beating an illness. she said. In September, she enlisted Nelson personal trainer Nicky Jennings, who works at a gym about 10 minutes from the Scurr family's second home in Richmond, and used a treadmill and cross-trainer for several weeks before Ms Jennings took her on short runs around Nelson's airport.

She has gradually built up to running five or six times a week and has clocked more than 240 hours on Cardrona's farm trails, Wanaka's riverside tracks and Nelson's hilly forestry roads.

Often, she walks hill trails with her husband and has noticed an improvement in his fitness too.

Her longest run to date has been just over 4 hours and on Saturday Mrs Scurr hopes to finish within five and a-half hours.

She has no plans to stop running now and has other events in her sights.

• Donations for Mrs Scurr's Out of the Blue campaign can be made through www.fundraiseonline.co.nz/annescurr.