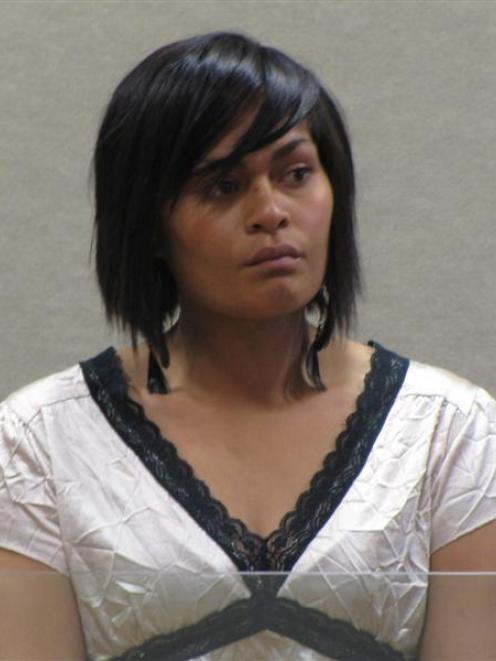 Anne Marie Patelesio in the Queenstown District Court yesterday. Photo by Staff Photographer.
Judge Kevin Phillips yesterday questioned whether a young Arrowtown drink-driver had benefited financially from a deal with a television company which broadcast an interview with her.

He made the comment in the Queenstown District Court during the sentencing of Anne Marie Patelesio (20), who last month pleaded guilty to two charges after she drove a four-wheel-drive vehicle over a traffic island, crashed it through a fence into a stone barbecue and ended up in a swimming pool on a Bedford St, Arrowtown, property on July 27.

TVNZ's 20/20 programme screened an interview with Patelesio on September 24.

Ms Lloyd told Judge Phillips her client appeared on the programme to prevent others from drink-driving.

She said Patelesio would not have to pay reparation to the owners of the car because they had been paid between $5000 and $10,000 by the television company.

It has previously been reported the car was a four-wheel-drive belonging to the mother of a friend of Patelesio.

Judge Phillips questioned whether Patelesio had "enriched herself" as part of the deal.

Ms Lloyd said Patelesio had not been involved in the deal.

It was between the owner of the car and the company.

Judge Phillips adjourned the case to November 2 for a full reparation report.

He said the owners of the property had applied to the court for a $250 excess on their insurance, but he needed to know the total cost of the damage.

He said the Queenstown District Council was seeking $3900 damages for the traffic island.

"The owner of the car seems to be covered by an agreement with a television show," he said.

However, Patelesio could not pay "preferred" victims over others.

Judge Phillips said Patelesio had been drinking with friends in an Arrowtown bar the evening before the crash.

She went to a friend's house where she continued to drink.

About 3am, Patelesio took the 4WD and drove around Arrowtown.

She had been driving on Bedford St at a speed of about 80kmh when she failed to take a bend in the road and struck a traffic island.

The vehicle ploughed through a fence, on to a residential property and struck a stone barbecue.

It became airborne for four to five metres before landing in a swimming pool.

Judge Phillips said there had been extensive damage to the property and Patelesio was extremely lucky not to have been injured.

"It is unbelievable that, at age 20, you would do it after having been convicted two or three years before at that level . . .

The community needs to be protected from drivers like you," he said.

Judge Phillips said that in November 2005, Patelesio was convicted of driving with excess breath-alcohol of 479mcg.

On the drink-driving charge from July this year, Patelesio was sentenced to 12 months' supervision, 250 hours' community work and disqualified for 12 months.

For dangerous driving, she was sentenced to 12 months' supervision, 100 hours' community work and disqualified for six months, all to run concurrently.

TVNZ public relations manager for news and current affairs Andi Brotherston, who responded to questions from the Otago Daily Times at about 9 o'clock last night, said the company had paid $2000 for exclusive video footage relating to the story.

The footage was of Patelesio and others drinking at a party before the crash, footage from within the vehicle while it was being driven, and of the four-wheel-drive after the crash.

The payment was made to the daughter of the family which owned the vehicle and was made to her because she owned the copyright to the video footage, Mrs Brotherston said.