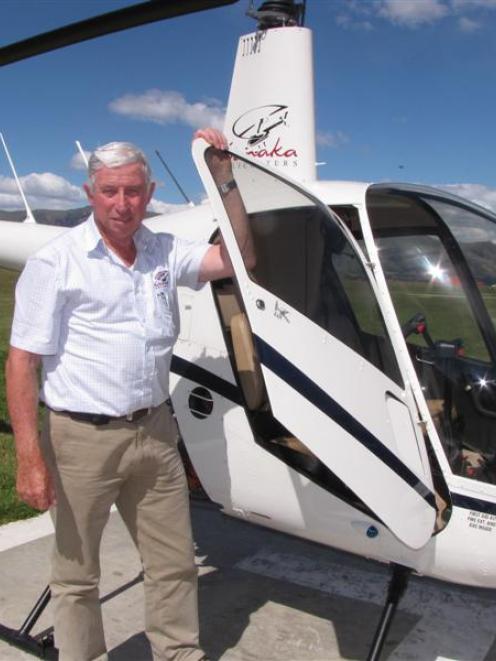 Wanaka Helicopters owner Simon Spencer-Bower, regarded as the most experienced Robinson R22 pilot in the world, considers the R22 (pictured) an extremely reliable aircraft. Photo by Lucy Ibbotson.
Despite the prominence of Robinson R22 helicopters in crash statistics - further highlighted by the recent death of a Queenstown pilot near Wanaka - the Civil Aviation Authority of New Zealand (CAA) has no specific safety concerns about the make of helicopter, providing it is used within its parameters.

CAA corporate communications manager Mike Richards said the higher-than-average accident rate for the R22 could be mostly accounted for by the large amount of training carried out in the machines, which meant they were often flown by inexperienced pilots or students.

"They have a higher proportion of learner drivers than bigger, more expensive, machines," Mr Richards said. "There are also occasions where they are used at, and in some instances beyond, their design limits."

CAA had "no particular safety concerns about this helicopter type when it is operated as intended by the manufacturer and within its design, maintenance and flight parameters".

There were 62 R22 accidents in New Zealand in the past 10 years.

The total number of accidents for all other helicopter makes over the same period was 122.

Fatalities occurred in nine of the 62 R22 accidents, five of which were in the Otago-Southland region (see fact box).

The most recent was on November 8, when Queenstown pilot Julian Kramer (52), also known as Julianne, died while flying a friend's R22 during a private flight over the Criffel Range.

He said because R22s were the lowest-cost helicopter to rent and fly, there were plenty in use, particularly by "low-houred" pilots.

"Most of the people who learn to fly around the world, probably 70% to 80%, are training in the Robinson helicopter," he said.

"They're not always crashing; it's just that there's a lot being used. I think now they're ... one of the most prolific helicopters in the world."

While the R22 had a big safety margin between its normal operations and its limits, he agreed that was sometimes compromised.

"Someone might exceed the limitations of the helicopter for whatever reason, but that's not unique to a Robbie."

Mr Spencer-Bower rated the R22 one of the most reliable makes of helicopter in the world in terms of its mechanics.

"They are a wonderfully reliable aircraft."

There are 154 R22s on the New Zealand register, making it the second-most-popular helicopter in the country behind its big brother, the R44, of which there are 170 registered.

Mr Richards said it could be a year before the final CAA report into the crash that killed Mr Kramer was complete.