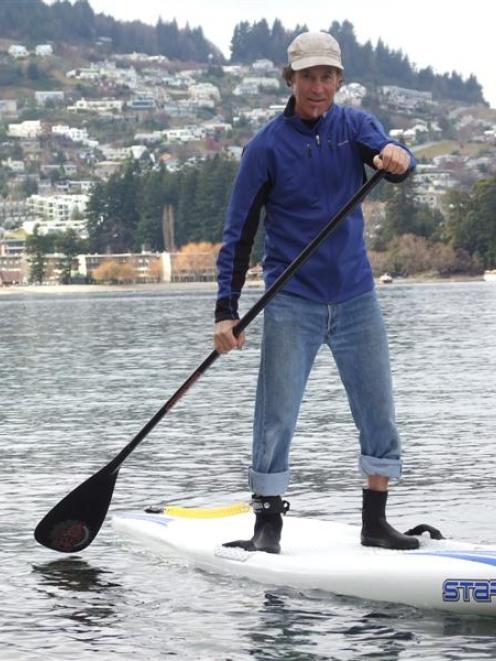 Queenstown paddle board enthusiast Jef Desbecker gets his toes wet before this Sunday's Quiksilver board races as part the Day on the Bay Winter Festival activities at Queenstown Bay. Photo by Joe Dodgshun.
For those wishing to prove their mettle against Wakatipu's winter waters, paddle boarding and surfboard paddling races have been added to Sunday's Winter Festival Day on the Bay festivities.

The inaugural Quiksilver Starboard standup paddle board race starts at 1.20pm, with paddlers standing on the Hawaiian-style boards racing to a buoy 100m out from Queenstown Bay and back, in relay teams of three. Up to 20 teams can enter.

On top of this, a maximum of 20 brave teams will get even wetter using their arms instead of paddles in the surfboard paddle event.

Quiksilver events manager Nigel Muscroft said the "quirky" event fitted in with the feel of the winter festival, the adventurous side of Queenstowners and the Australian brand's motto to "awaken the spirit of surfing in everyone".

Free pairs of Quiksilver boardshorts will be given to the first 20 teams to enter, but participants are allowed to wear something a little more substantial.

"They are allowed to wear wetsuits underneath. We're not that cruel," Mr Muscroft said.

"We are just really stoked to be part of the festival, which was voted in Australia as the fourth best festival in the world above Oktoberfest in Germany and the Running of the Bulls in Pamplona."

Both team races can field mixed gender teams, surfboards are to be no longer than 10ft, and 15 paddle boards are available for the first 15 teams to enter online.

The Day on the Bay festivities begin at noon with the birdman competition, followed by jet sprints, the "Hundy 500" underwear race and the splash 'n' dash.