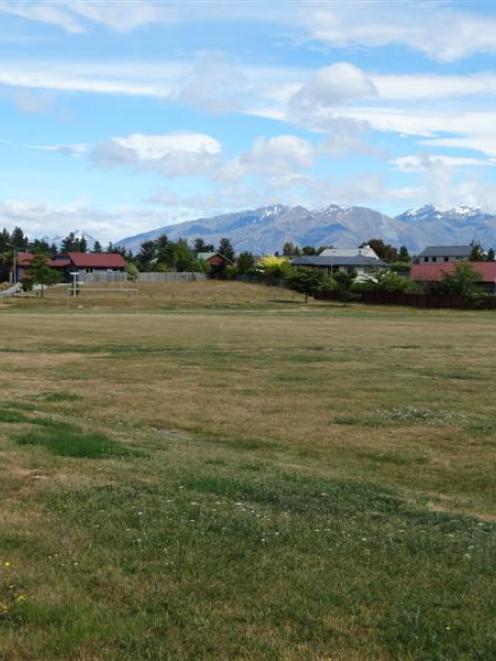 At this month's Wanaka Community Board meeting, QLDC parks and operations manager Mike Weaver said the council would not be watering Allenby Park, near Wanaka's Mt Iron, despite requests from residents to do so.

The council had irrigated the park until last year, but a combination of the high water use and staff time required and a lack of safe equipment made it impractical.

There was no in-ground irrigation system at Allenby Park, meaning a mobile irrigator was necessary, Mr Weaver said.

The QLDC had been advised by the Otago Regional Council it had exceeded its water consent for use of a bore on Pembroke Park, a 10.5ha public space in Wanaka's town centre, opposite the lakefront.

Pembroke Park and the neighbouring Wanaka Showgrounds are the only reserves the council is irrigating in Wanaka, because they are used as sports fields.

The community board backed Mr Weaver's comments and agreed the QLDC should continue to take water-saving measures where possible.

ORC environmental monitoring director Jeff Donaldson said the consent limit breach appeared to be related to an issue with QLDC's recording of its water use.

''It could have been their data recorder wasn't actually measuring correctly. It was never a deliberate exceedance or anything. It's just one of those things that happens sometimes.

''QLDC have been working with us and we've identified that they have been over their consented limits. But we're working to get that corrected with them as we would with any other consent holder and we're confident that the matter will be resolved.''

Mr Weaver told the Otago Daily Times the irrigation demands for Pembroke Park had outweighed the consented take last year and the council was ''investigating options to manage this over this summer''.

However, there had been no reduction in the council's water use at the park yet.

''What we are doing ... [is] looking at the condition of our irrigation systems and we're investigating how can we improve it.''

Whether there would be a noticeable ''browning off'' of Pembroke Park this summer was solely dependent on the weather, Mr Weaver said.

''Last year, for instance, we had pretty bad weather up until Christmas, and after Christmas, so it maybe wasn't as prominent, but we've had a pretty dry December [this year].''

Depending on location, the Queenstown Lakes District Council relies on a a mixture of bore, direct lake or mains takes for irrigating its reserves.