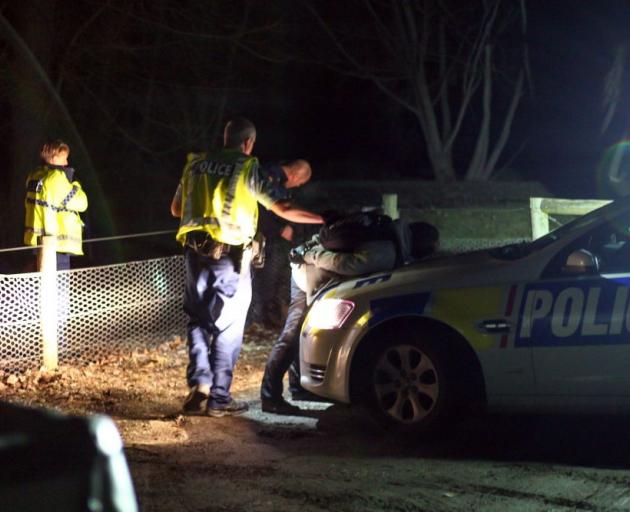 A man is detained after a police chase in the Queenstown area last night. Photo by Blair Pattinson

The knifepoint robbery of a Queenstown liquor store last night and subsequent car jacking are being investigated by police.

Senior Sergeant Darryl Lennane, of Dunedin, said a man wielding a knife entered Henry's Liquor Store in Shotover St about 6.50pm, demanded cash and left with an amount of money.

After leaving the store, the man, still armed with the knife, stole a vehicle from a member of the public, Snr Sgt Lennane said.

The man and another person drove away in the stolen vehicle and were chased by police to Dalefield, where the stolen car entered Mooney Rd.

The Otago Daily Times understands the stolen car - a silver BMW 1 Series - crashed through a fence in Mooney Rd and came to rest in a field, where police apprehended the driver about 7.30pm.

The other man fled the scene and police searched using a helicopter and a thermal imaging camera. A police dog unit from Invercargill found the man hiding in reeds about 9pm.

The bloody man ''didn't say a word'' during the robbery, Mr Gooch said.

''I went to the counter to pay, and the guy behind the counter gave me a really weird look.''

Mr Gooch ''grabbed'' his girlfriend and the couple left the store.

''The guy walked off really calmly.''

Douglas Hogg, of Queenstown, said he was outside the store during the robbery and it was over in about 30 seconds.