Time for change: Leea up to challenge 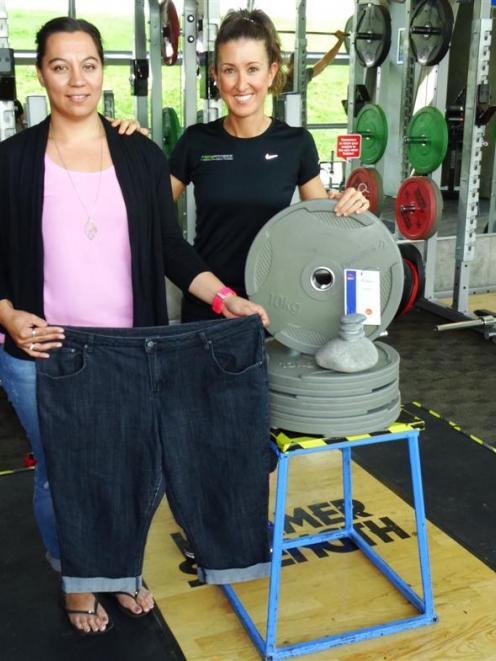 Queenstown's Leea Hirst (left) with her trainer, Ruth Wilkinson, of Prime Fitness. Ms Hirst (31) has lost almost 40kg in the past 18 months and was last week named the overall winner of the nation-wide Catch Fitness 20 Week Challenge. Photo by Tracey Roxburgh.
In February last year, Queenstown woman Leea Hirst signed up for a five-week gym programme.

At the time, she had one goal: to shop comfortably at Glassons.

Fast forward 18 months and the 31-year-old has achieved that and more than she could have imagined, losing almost 40kg, dropping five dress sizes, and last week being named the overall winner of the Catch Fitness 20 Week Challenge, winning a P&O cruise for two.

The win, which came as a shock to Ms Hirst, was ''not about the weight loss'', she said.

''It's about the ethos of the 20 Week Challenge - fostering all of it, encouraging others, motivating others and getting people to join you.''

''Before that I was happy, life was good. I just needed a change.''

After the five-week programme, she went on to complete a 12-week programme and boot camps before the 20 Week Challenge was suggested.

She won a free entry and continued seeing Mrs Wilkinson twice a week, along with group sessions every weekend with the other 10 women in her team.

Between April and September she lost 8.7kg in weight. Although Ms Hirst had no expectation of winning the national competition, Mrs Wilkinson said she never had any doubt.

''Once she sets her mind to do something, she's absolutely focused and committed the whole way through.''

It was the first year Queenstown had entered teams in the 20 Week Challenge - Mrs Wilkinson's team of 11 and fellow trainer Di Lauder's team of nine - going on to win four of the 20 prizes on offer.

Ms Hirst, RHE Mechanical's accounts and administration manager, said she had learnt valuable lessons in the past 18 months.

She has advice for anyone wanting to make a lifestyle change: ''It's one foot in front of the other.

''You might take some steps back, but it's all about how you react to it. Just get up and keep taking steps forward.''