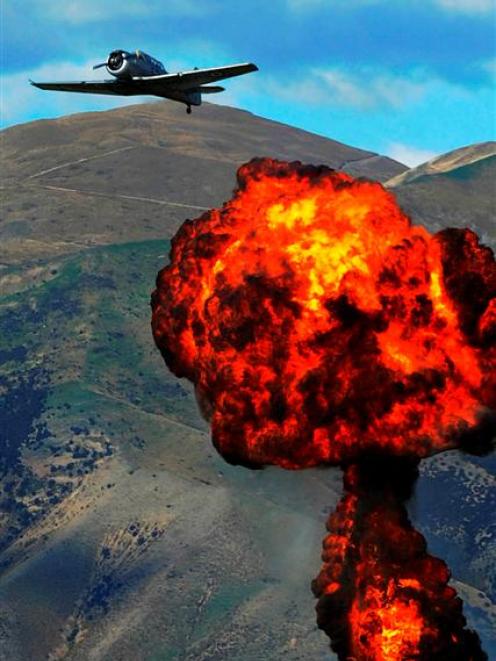 A North American Harvard passes overhead during the mock airfield attack at the Warbirds airshow yesterday. Photo by Peter McIntosh.
Thousands of plane-spotting, camera-toting aviation enthusiasts spent many hours transfixed by action in the skies at the weekend as the Warbirds over Wanaka airshow went through its paces for the 14th time since 1988.

The hot Indian summer was a major factor in drawing huge crowds to the small airfield near Luggate for displays by vintage military aircraft, the Royal New Zealand Air Force, Air New Zealand and others.

Attendance figures were not available yesterday.

Airshow chief executive Roger Clark said he would not hazard a guess at the crowd size but his gut feeling was it was similar to that at the 2010 airshow, which attracted about 65,000.

The event is now a major tourism and economic driver for the district and in 2010 was estimated to have had an economic impact of $25 million, with visitors spending $10.6 million locally.

This year appears to have been no exception, with accommodation reportedly heavily booked and shops and cafes doing a roaring trade.

People in the traffic queue on Saturday morning were not so happy with at least an hour's delay getting into the airfield.

Event manager Mandy Deans said the organisers had learned from that and accepted another car park should have been opened earlier in the morning.

"But as soon as that happened, they got the cash sales going down the line and it [the queue] was gone in about 10 or 15 minutes," she said.

Ms Deans was delighted with the weekend's crowds.

"Certainly, Saturday's crowds were right up there and Friday's appeared more than we have had before for a practice day. That was probably because more specific practice times were allocated than previously and there were more aircraft," she said.

In a coming of age for the airshow, there were no overseas aircraft other than a T-6C Texan built by Hawker Beechcraft Defense Company in Kansas, United States.

"I think we are at the stage where we don't need to have overseas aircraft. We can have an extraordinary airshow without bringing in anything from overseas. That is not to say we won't again," Ms Deans said.

Another pleasing aspect was the attendance by two squadrons of air cadets and the interest shown by New Zealand and US air force top brass, she said.

There were 17 top New Zealand air force personnel in Wanaka, along with US Pacific Air Force commander General Gary North.

Ms Deans said Gen North's attendance on Saturday was a surprise because it had not been known he would be there.

There were minor alterations to the programme throughout the weekend but each aspect of the programme went to air at some stage over the three days.

Yesterday's much anticipated Red Checkers finale, in honour of retiring Squadron Leader Pete Cochrane, could not go ahead because one of the pilots had a cold, resulting in Saturday's performance being the squadron leader's swan song in the group he has been with for 19 years.

The RNZAF's 2010 helicopter acquisition, the Italian-manufactured Agusta 109 light utility helicopter, was part of the display alongside the more well-known Iroquois, Seasprite and Hercules.

Air New Zealand's new Triple Seven flew past languidly yesterday. Painted in its All Blacks livery, it did not fly over a group of Highlander rugby players and All Blacks captain Richie McCaw, as had been promoted.

Mr Clark said several Highlanders were at the show but he did not know why it had been promoted they would stand on the runway while the airliner flew over.

McCaw was not there yesterday but attended on Friday and Saturday.