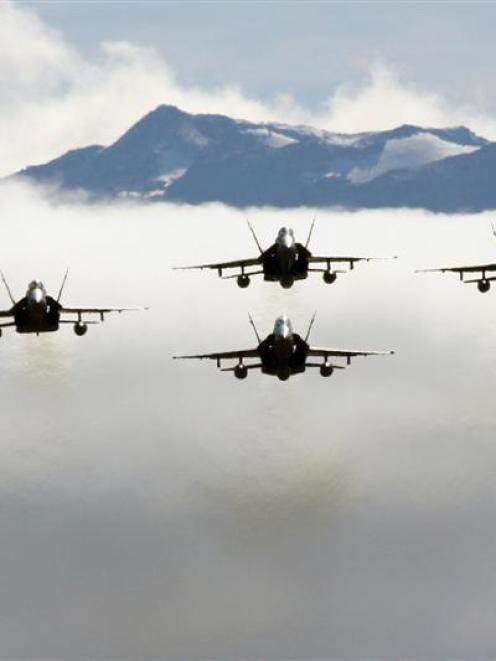 Reporting to the annual meeting of the Warbirds Over Wanaka Community Trust this week, general manager Ed Taylor said he had contacted the air forces of Australia, France, Singapore and the United States about the Easter 2014 show but had yet to hear which would attend.

The Royal New Zealand Air Force is the only one confirmed so far - ''operations permitting'' - and is likely to send its new NH90 helicopters, which are capable of carrying 12 to 18 troops.

Mr Taylor said the French Air Force got ''very close'' to attending the 2010 show but had been diverted four days out because of political troubles in Bougainville.

The most likely aircraft to be sent by the French would be the CASA - a smaller version of the RNZAF's Hercules.

Mr Taylor said he had made an ''initial approach'' to the Republic of Singapore Air Force which has links with the New Zealand Defence Force and had a range of aircraft that would add interest to the show.

The Royal Australian Air Force has sent fighter aircraft in the past - including four F/A-18 Hornets - and Mr Taylor said Australian personnel were always keen to attend, if they were able.

''They don't get to fly in mountain terrain like this very often.''

The United States Air Force had declined an invitation to the show.

Mr Taylor said budget constraints meant the USAF had pulled out of all airshows for a year, which Mr Taylor said had meant some United States shows had been cancelled.

Initiatives for next year's Wanaka show include a display of World War 1 aircraft over the lake and a ''rides day'', offering airshow patrons rides ''on anything from a Spitfire to a Tiger Moth''.