The informal event was organised by Frankton volunteer firefighter Jamie Harris, who said the participants were part of his "wider firefighting family" he met two or three times a year at stair-climbing events.

As well as a local firefighter, there were four from Winton, three from Canterbury, and three from Morrinsville, Waikato. 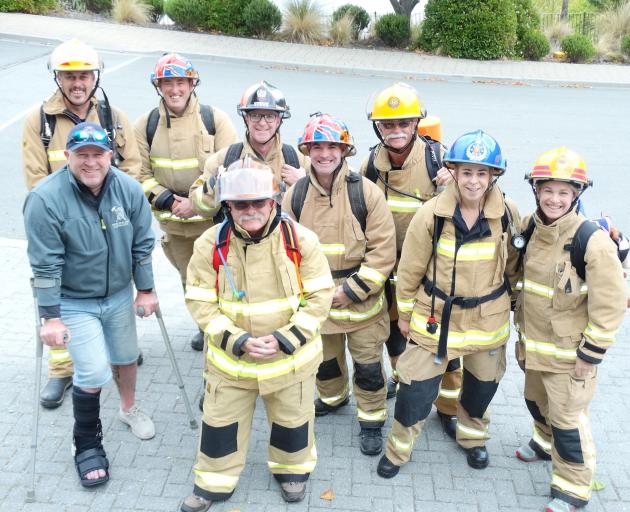 Pictured before the start the ‘‘March March’’ up Queenstown Hill on Saturday are (back, from left) Aaron Cassie, of Canterbury, Guy Johnstone, Stephen Turton and Ernie Pringle, all of Winton, Greg Barrett and Victoria Kelland, both of Canterbury, Michelle Hinton, of Morrinsville, and (front, from left) Jamie Harris, of Frankton, and Alvan Walker, of Morrinsville. PHOTO: GUY WILLIAMS
Mr Harris, who could not do the walk because of recent leg surgery, said he started the event last year in response to the cancellation of the annual Auckland Sky Tower 9/11 Memorial Stair Climb as a result of Covid restrictions.

"It’s to remember those who have given, and those who are no longer here who’ve given.

"It’s not about first place, it’s about participation."

He had wanted to run an event in Queenstown after taking part in many stair climbs in New Zealand, Australia and the United States over the past 12 years.

Most of those who took part on Saturday would also compete in the Firefighter Sky Tower Stair Challenge in Auckland on May 22.

However, he was quick to point out Queenstown Hill was a bigger climb than the Sky Tower.

"I’m lucky I’m incapacitated and can’t do it, but it is my training ground when I’m preparing for the Sky Tower."