By Guy Williams and Mark Price
0 Comments
The beginning of the ski season in Queenstown Lakes yesterday was marked by a mixture of excitement and relief.

In Cardrona as the Prime Minister Jacinda Ardern was making her first visit.

And in Queenstown, as David Furniss, of Arrowtown, marked his 12th time as on the first chair up the mountain — albeit after a sleepless night on a deckchair next to the chairlift.

The positive mood was also in recognition that the skifields could open following months of uncertainty.

The Prime Minister was greeted by about 400 helmeted, goggle-wearing, well-wrapped-up skiers and snowboarders.

And her message to New Zealanders not skiing yesterday was for them to visit the Lakes district.

She acknowledged the work of skifield staff who had been "beavering away" in preparation for the opening of the ski season.

"It’s been an enormous effort."

On the first chair at Coronet Peak yesterday are (from left) Roland Cameron, of Invercargill, David Furniss and Tony Russel, both of Arrowtown, and Florence, Archie and Albert Cameron, all of Invercargill. Photos: Guy Williams 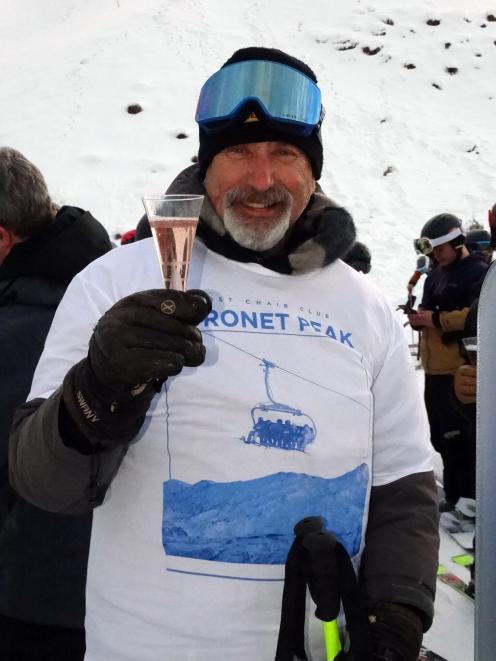 Arrowtown’s David Furniss enjoys a sparkling wine to celebrate getting on the first chair for the 12th time.

Ms Ardern was greeted with a Maori welcome, a kapa haka by Mt Aspiring College pupils and a song by pupils of Wanaka primary school Te Kura O Take Karara.

And in sunny, warm conditions, Ms Ardern and other dignitaries were escorted by resort staff up the mountain on the McDougall's chondola.

Over the hill, Coronet Peak manager Nigel Kerr said he sensed "an awful lot of relief" at the ski area's opening day.

"Relief from the staff they’ve all got jobs, and relief from people in Queenstown and Wanaka that they can ski and board."

Mr Kerr said that buoyant feeling contrasted with the mood two or three months ago, soon after the arrival of Covid-19 in the country, when many were questioning whether there would be a ski season at all.

The closed border meant it would be a much quieter season than usual.

That created an opportunity for New Zealanders, especially families, to enjoy more space and a "nicer pace of life" on the mountain.

NZSki chief executive Paul Anderson said he was "absolutely amped" about opening day because of all the uncertainty of the past few months as the Covid crisis unfolded. 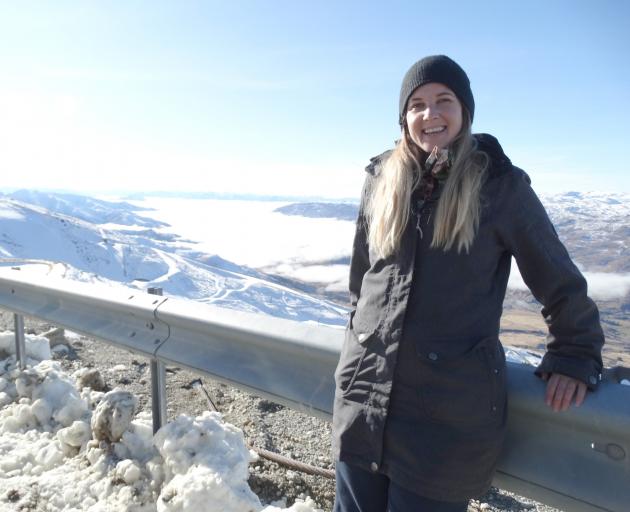 Arizona snowboarder Jamie Lewis surveys the inversion layer that has kept Upper Clutha residents in the gloom for more than a week. Ms Lewis was one of almost 2000 skiers and snowboarders who enjoyed spring-like sunshine and warm temperatures at the Cardrona Alpine Resort’s ski season opening day.
However, the industry-wide effort to plan for a season under Alert Level 2 had not been wasted because it gave the company, its staff and the community confidence it could operate in that scenario.

However, it was not planning for a transtasman bubble.

"If we get it, that’s fantastic, but we’re realistic about that.

"We think we’re going to get a slightly stimulated domestic market, because people can’t get up to the [Pacific Islands] or the Gold Coast, and so Queenstown’s a fabulous place to come for a family holiday."

Treble Cone opens today and The Remarkables opens next Saturday.