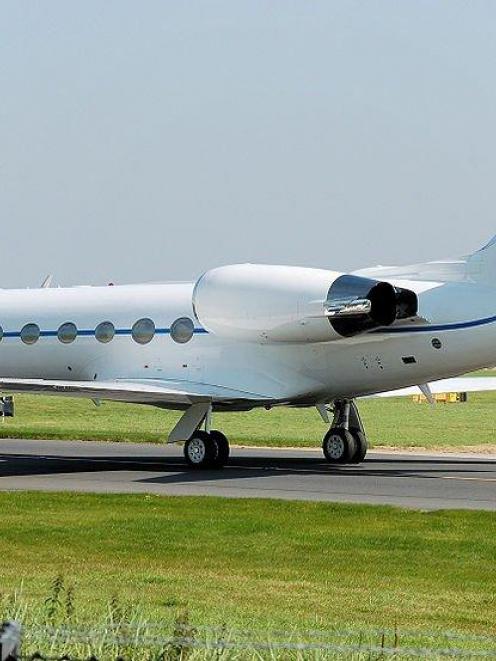 A Gulfstream 4.
A planned air race for corporate high-flyers may bring up to 40 privately-owned jet aircraft to the Warbirds Over Wanaka Airshow next April and boost business links between China and New Zealand.

The aircraft will make a low-altitude pass over Wanaka Airport during next Easter's airshow, as part of the Hong Kong to Christchurch Silver Ferns Air Race, between March 26 and April 1. The aircraft will also fly over Fiordland.

Many participants and followers are expected to attend the airshow from April 5 to 7.

Silver Ferns Air Race Ltd chairman Jules Tapper, of Queenstown, told NZPA this week that business dealings between China and New Zealand could get a high-level boost from the air race, which would double as a business trip for those who flew in the aircraft.

Planning was in its early stages but the race would target corporate jets, business leaders and decision-makers, he said.

Four businesses had already shown interest in entering, despite an entry fee which could reach $200,000 for a Gulfstream 4 corporate business jet.

"What they are getting for their package is quite substantial. They stay in luxury lodges. We've got tickets for the Warbirds, dinners and ceremonies in Singapore, Melbourne and Christchurch."

The organisers would organise introductions with New Zealand business leaders and hoped to have Prime Minister John Key and Finance Minister Bill English at functions.

"The Chinese at the moment have got a lot of cash to spend overseas and we would like them to open their eyes to the potential they can get involved in," Mr Tapper said.

"What we are trying to do, apart from the race, is to drive business from New Zealand into southern China and Hong Kong.

There are business people there showing interest in various things and aspects of business in New Zealand and we want to introduce the two parties."

The race would begin just after the Hong Kong sevens rugby tournament finished and arrive in Christchurch on April 1, in time for the opening of the new Christchurch air terminal.

Warbirds Over Wanaka event manager Mandy Deans said yesterday the line-up of aircraft would be impressive.

"Some race followers and participants will take gold passes and other hospitality options at the airshow and the spectacle of seeing large corporate jets flying over will be amazing," Ms Deans said.

Lake Wanaka Tourism general manager James Helmore said the people being targeted to take part in the race were "high net-worth individuals and they are people we want to attract to Wanaka".

The race was open to airlines, military aircraft, high-performance turboprops and piston-engined aircraft, with entrants handicapped according to aircraft performance.