All supplies could be chlorinated 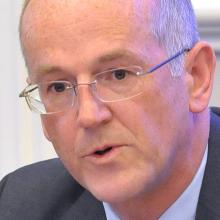 Keith Reid.
A warning from health authorities has prompted a $500,000 plan to chlorinate all drinking water in the Queenstown Lakes area.

But Lake Hawea residents say they are ready to fight for what they say is their right to unchlorinated water.

The Queenstown Lakes District Council’s draft annual plan, which should be adopted by councillors today, signals its intention to permanently chlorinate all town supplies, including Arrowtown, Glendhu Bay, Lake Hawea, Arthurs Point, Luggate and Glenorchy, which are not chlorinated at the moment.

That follows the temporary chlorination, over summer, at Arrowtown, Lake Hawea and Glendhu Bay.

Public submissions on the draft annual plan open on Saturday and community meetings in April will allow residents to express their views on the chlorination issue.

At a public meeting in January more than 100 Lake Hawea residents expressed their opposition to having chlorine in their water supply.

A pressure group called Hawea Stand for Pure Water was formed last year. Spokeswoman Jen Rumore said the community was ready to do all it could to stop chlorination of the town’s water supply.

She hoped the Wanaka ward councillors would listen to their concerns. Hawea Community Association chairman Paul Cunningham echoed her concerns.

"I don’t think there will be anything new we haven’t heard before, but  people are very strongly against it and they need to be heard."

There is already space for chlorination equipment in places like Arthurs Point, Arrowtown and Lake Hawea.  In other areas, like Luggate and Glenorchy, small buildings might have to be constructed, he said.

Water supplies are mainly tested for E.coli and the parasites giardia and cryptosporidium.

In 2012, a norovirus outbreak in Cardrona, caused by sewage contamination of drinking water, caused at least 53 cases of diarrhoea, vomiting and nausea.

Dr Reid’s September 5 letter to council chief executive Mike Theelen, released by the council to the ODT, warns the Havelock North incident had "clearly altered" the political and public tolerance of failures to ensure drinking water was safe and chlorination "may need to be reconsidered".

"This may mean that improvement measures identified in water safety plans but not yet implemented may need to be accelerated."

Dr Reid, of Dunedin, does not have the power to order councils to chlorinate.

Yesterday he welcomed what he called the council’s precautionary approach.

He said it meant: "You can turn on the tap and know every day, 24 hours a day, that your water is protected from bacterial and viral contamination."

"You could imagine, if there was a large-scale outbreak, the impact that that would have on the tourist industry in Queenstown."

He did not think Queenstown’s hospital could cope with an outbreak the size of Havelock North’s.Arrowtown Village Association chairman Russell Heckler said the community had been disappointed when it was announced the water supply would be chlorinated over the 2016-17 summer.

But he had heard no complaints about it.

"I must admit the level of chlorine they’ve got in it must be reasonably low."

The annual plan will be adopted in late June.