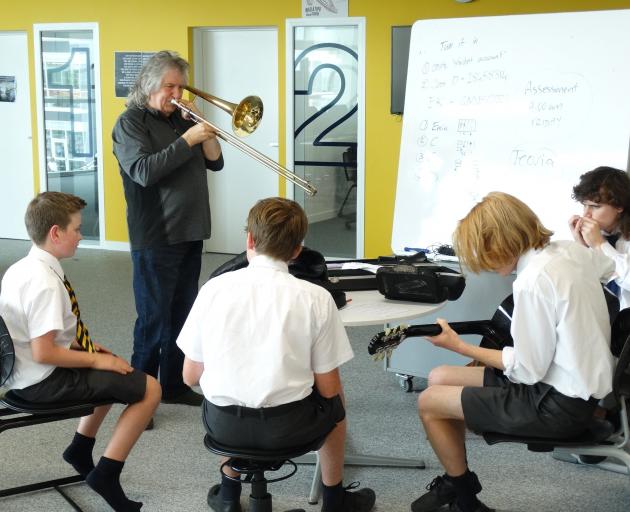 Jamming with jazz trombonist Rodger Fox, of Wellington, are Wakatipu High School pupils (from left) Samuel Stanton, Alex Stalker (both 12), Harry Thomas and Ollie McLeary (both 17).PHOTO: GUY WILLIAMS
A young person has a better chance of forging a career in the arts than in sport, New Zealand jazz luminary Rodger Fox reckons.

The country’s foremost jazz trombonist and long-time senior lecturer at the New Zealand School of Music spent yesterday afternoon at Queenstown’s Wakatipu High School, jamming with pupils and holding a masterclass with members of its jazz big band.

The Wellingtonian, who is in the resort to headline tonight’s "Jazz in Concert" with the Queenstown Jazz Orchestra, said there was a tendency in New Zealand schools to place more emphasis on sport than the arts.

Although he loved sport, one of his goals when visiting schools was to help tip the balance back to the arts by inspiring more youngsters to get involved in music.

Although many young people dreamed of a sports career, "the percentages work against that", Fox said.

The New Zealand Symphony Orchestra alone employed almost as many musicians as the country’s five Super Rugby teams had players, and the careers of the latter were usually over by the age of 35.

"The best thing about music is that you can do it at any age."

Fox, who is also a big-band leader, arranger, producer and musical director, said jazz continued to be popular in schools.

At last count, there were about 120 high school big bands — each with 20 or so players — which was "far more" than orchestras or brass bands.

Some of New Zealand’s most popular bands, such as Drax Project, Fat Freddy’s Drop, The Black Seeds and L.A.B., were full of musicians who had studied jazz, including under him at the New Zealand School of Music.