By Guy Williams
0 Comments
The driver of a bus that crashed near Queenstown with 22 Chinese tourists on board has written to his victims to say he can ‘‘never forgive himself’’ for what happened.

Liang Fang (32), of Christchurch, was driving the bus and trailer to Glenorchy on January 21 when he lost control on a tight, steep bend near Wilson Bay.

The bus tipped over and skidded for about 40 metres, shattering the windows along one side.

Four passengers were flown to hospital, including a 10-year-old girl who lost both hands in the crash.

One of her arms was amputated near the shoulder, and she and her family remain in Auckland, where she is still undergoing rehabilitation.

A woman with a serious arm injury had the limb amputated at the shoulder, while another 18 passengers suffered minor to moderate injuries.

Fang admitted charges of careless driving causing injury to Leyao Dong, Qin He, Jun Yang and Yixin Cai, but applied for a discharge without conviction when he appeared before Judge John Strettell in the Queenstown District Court yesterday.

His lawyer, Kirsty Allan, said he felt ‘‘deep remorse’’ for his actions: ‘‘It’s a burden he will live with forever.’’

However, a conviction could result in his deportation, or jeopardise his ability to renew his work visa or gain permanent residency. 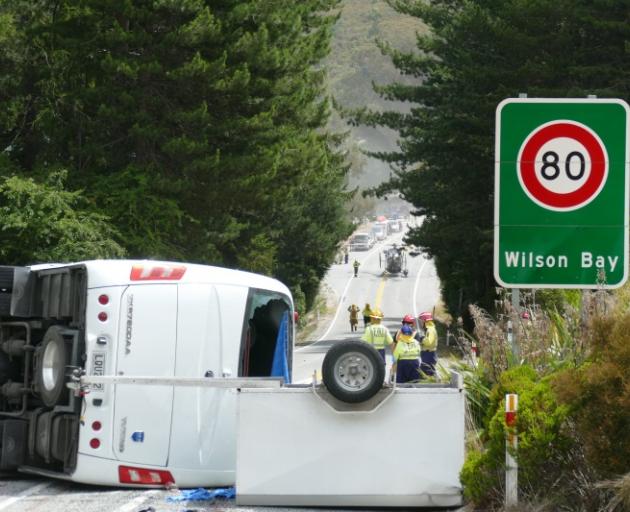 As a result of the crash and the Covid-19 pandemic, he had lost his job with Awing Travel NZ Ltd.

He was suffering from depression and anxiety, and a conviction would exacerbate those conditions.

Fang was driving at 62kmh as he entered the bend — 17kmh above the recommended 45kmh — and estimated his speed had reduced to 50kmh as he exited the bend, Ms Allan said.

But halfway through the bend he encountered sun strike, causing him to maintain the turn for too long.

Based on his own research after the crash, he believed the speed advisory sign was too close to the bend, and he had struggled to see the yellow sign because of yellow flowers in the grass behind it.

Judge Strettell said the crash occurred on a dry road, with good visibility, on a route Fang had driven several times before.

Having already encountered sun strike on the journey, he should have been aware it could recur and reduced his speed accordingly.

‘‘These are the standards of a normally prudent driver, but he had added responsibilities as a professional driver.’’

The case served as a warning to professional drivers to ‘‘take care, act cautiously, drive to the conditions and at all times be conscious of the responsibility they have to their passengers’’.

It was not for the court to take away Immigration New Zealand’s ability to make decisions about the defendant’s immigration status, he said.

He refused to grant a discharge, convicted Fang, and sentenced him to 200 hours’ community work.

Fang is disqualified from driving for nine months, and must pay a total of $9000 in reparation to the two most seriously injured passengers.