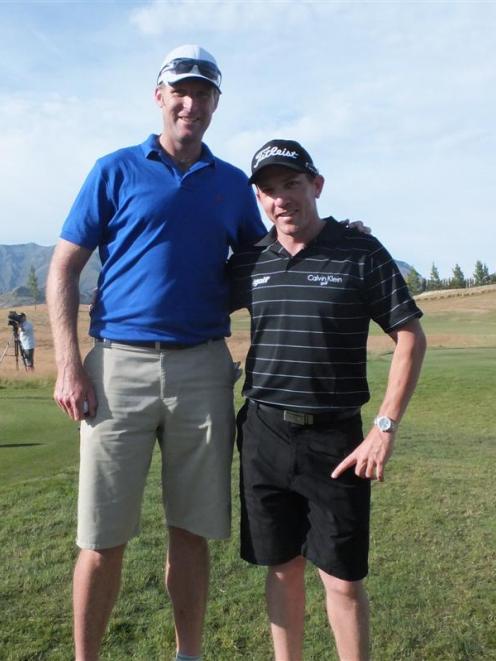 Olympic rower Mahe Drysdale (left) stands with his coach and caddy Guy Wilson before teeing off in the seeding round at Millbrook on Friday. Photo by Olivia Caldwell.
The PGA pro-am last week brought about an unlikely partnership between two people who are no strangers to the limelight.

Olympic rower Mahe Drysdale was given the caddy of golfing prodigy Lydia Ko.

Speaking to the Queenstown Times before the tournament, Wilson said he had some some work ahead of him, tracking Drysdale's long drives.

''It's a lot less predictable and it's difficult to sort of plan your way around the golf course. The balls don't go exactly where you want them to go.

''It is more challenging, although I guess the expectations aren't as high. Being an Olympic athlete, he still wants to play well and enjoy himself.''

The friends met when Drysdale signed up for golf lessons at the New Zealand Golf institute in December and when he was offered a spot in the championship as a celebrity, Wilson decided it would be a fun idea to caddy for someone else for a change.

''Lydia's just starting to come more independent for her own game now, so it's important for her to start making decisions by herself whilst away and not be so reliant on the same person, so that was one of the things that helped her make the decision.''

Wilson said the weekend was stress-free for Ko, who has been in the media spotlight since she won the New Zealand Open late last year as an amateur.

He said the media attention surrounding Ko was starting to take its toll and she was looking to tone that down.

''In New Zealand you generally say yes to everything. Before you know it, you are trying to do more for everyone and less for yourself, so it's difficult in that respect.

''It's becoming increasingly difficult to say yes to everything. That's something us Kiwis do.

''We say yes to everything, but if you look at any other No 1 player in the world, they would be guarded completely.

''She's so open to everything, but I guess if it starts impacting on her game and enjoyment, then I guess we will have to curb it a little.''

Drysdale, who has played golf since he was 15, was keen to get competitive on the golf course and enjoy the limelight off the water.

''It's really a lot of fun, and obviously when you get into competition, you want to win; that's just who I am - a competitive person. I'll do my best but I guess the format of the tournament is really great. It doesn't matter how you go.

''I think I've certainly been much more of a challenge for him [Wilson] than Lydia.''

''When I get hold of one, it's really good, but it's getting it to go straight. It can be my strength and my weakness.''