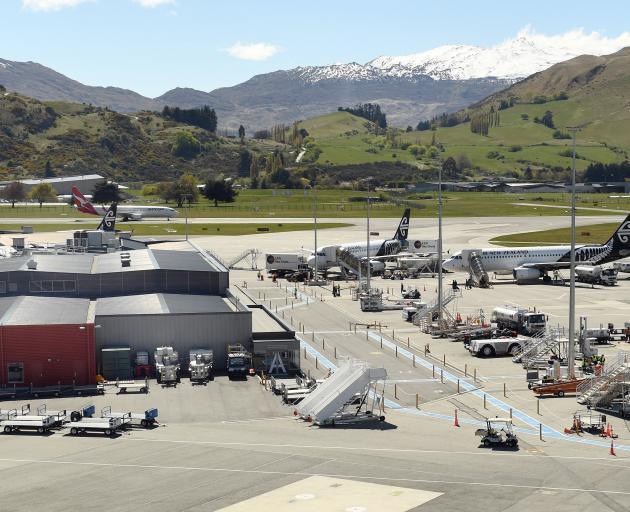 However, as Mark Price reports, sharing Queenstown’s flights and tourists around the region does not seem likely to dampen the enthusiasm for developing Queenstown and Wanaka Airports.

The idea of Dunedin and Invercargill airports taking some of the load off Queenstown Airport has been given the thumbs-up by civic leaders this week.

Clutha-Southland MP Hamish Walker put forward the idea of a "dialogue" across Otago and Southland to "disperse tourists".

"I encourage the aviation industry and local airports to get together and work out a strategic approach to the pressures on Queenstown Airport.

"It doesn't have to be a Wanaka/Queenstown-only decision, but is an opportunity for Invercargill and Dunedin to have dialogue with Queenstown and come up with an innovative solution."

Asked to respond, Queenstown Mayor Jim Boult said taking that approach did not "remove the need to develop domestic capability in Wanaka, or continue to plan for some forecast demand at Queenstown".

However, he did describe a regional approach as "a very sensible one", and already part of the Queenstown Airport Corporation's draft statement of intent.

"Given the significant barriers and cost to creating a brand new airport elsewhere, as some have suggested of late, maximising the opportunities for the wider Otago-Southland region through our already international-capable airports in Dunedin and Invercargill would seem to be of benefit to all stakeholders."

And while he supported the "current thinking" of a dual airport model for Queenstown and Wanaka airports, he said the QAC would continue to work closely with the other main airports to ensure "alignment with district-wide master planning processes and initiatives" to address "destination infrastructure constraints" and to find "solutions to local social issues".

"Having just returned from China, I can attest to the fact that Chinese visitors are interested in visiting the wider region, so there is certainly scope for a dual or even multiple airport approach that easily facilitates a regional journey.

"We would welcome a discussion with Queenstown and our other neighbouring regions to work out a feasible and mutually beneficial approach to the issue."

Mr Christie said conversations had already begun across the region on "a cohesive regional tourism infrastructure".

Venture Southland group manager for tourism, community and events Bobbi Brown acknowledged the conversations but "we have to keep in mind what visitors want when they visit and it is maybe that some are not interested in other experiences beyond Queenstown".

"Progress has been made in recent times and the matter has already been scrutinised by all parties at length, with it being an ongoing focus for the Mayoral Forum and tourist operators."

And Clutha District Council chief executive Steve Hill said "it should never be suggested a regional solution can't be found, it is just recognised as being challenging.

"We are always willing to collaborate."

Invercargill City Council chief executive Clare Hadley said the council was "always willing" to work with its neighbours, "and we'd be happy to be involved in any dialogue".

Waitaki MP Jacqui Dean said she would like to see a "broader debate" about how tourism was managed in the region "using the resources already at hand".

Invercargill MP Sarah Dowie said there was a need for a "cohesive approach" to tourism and dispersal of "air travel pressure between ports".

"Visitor dispersion is not only about adequately managing the adverse effects on infrastructure or the environment but, just as importantly, about making sure the visitor experience is a good one and what makes a place special is preserved."