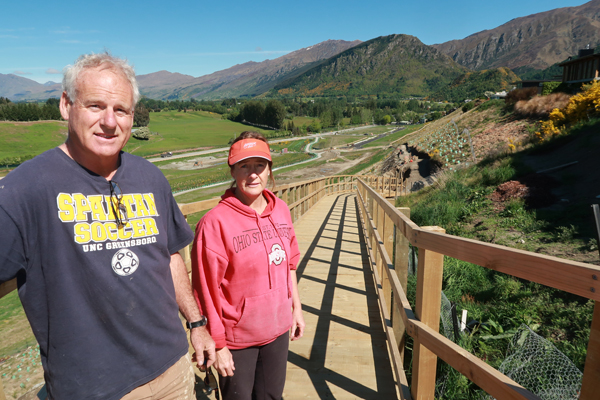 Derek and Anna Brown pictured on the controversial boardwalk outside their Arrowtown house in 2019. Photo: Mountain Scene
After lengthy discussions, intervention from a lawyer and thousands of dollars, a controversial Arrowtown boardwalk has been deemed unconsented and must be dismantled.

In August 2017, Arrowsouth was given consent for the Arrowfields subdivision, including 20 residential freehold titles, on the northeast side of McDonnell Rd.

As part of that consent, the developer was to form a public walkway up to Advance Tce.

But in November 2019, Mountain Scene reported Derek Brown and his wife, Anna, were agog to find a boardwalk, more than three metres high, erected smack-bang against their property.

It popped up over the track’s final stretch, on land zoned ‘private open space — pastoral 1’.

The Browns understood the track would culminate in a few steps beside their property, which they’d planned to screen off.

At that stage, former council spokesman Jack Barlow said there had been a "minor change" to the design of the footpath to turn it into a boardwalk due to "structural construction requirements".

But, he said there’d been no change to the height, scale or scope of the structure, meaning it fell within the bounds of its resource consent.

The Browns and fellow residents David Palmer and Greg Turner didn’t buy that and started doing their own research, only to discover somewhere along the way a council staffer had changed the planned compacted gravel track to a boardwalk, so cyclists didn’t have to dismount to navigate steps.

Derek Brown says there wasn’t any consultation with affected parties because the staffer believed effects would be "minimal".

"It was not of minimal effect.

Eventually the neighbours engaged lawyer Graeme Todd and "ended up paying thousands between the three of us" for reports to be prepared for the council to consider.

"We had to … put something on the table to say, ‘if you don’t do something, we’re going to go to the Environment Court and you’re going to lose … and it’s going to cost you a lot of money’.

"We put it on their desk and all of a sudden there was massive back-tracking."

In a just-released decision, the council’s now granted non-notified consent to change an "approved trail design" — which ultimately means the entire boardwalk structure needs to be pulled down, and replaced with gravel trail and steps, as originally planned.

While happy with the end result, Brown says the process has been "a disgrace".

"What happened to us is not uncommon in this town.

"They [council] should take a good hard look at the way they operate, as they seem to be a law unto themselves."

"they seem to be a law unto themselves." is also reflected in their Freedom Camping bylaw.

Well done! Just a shame you have to invest significant funds to ensure your rights are upheld. Sadly there are many who don’t have money to engage lawyers or consultants and consequently they get kicked to the curb.