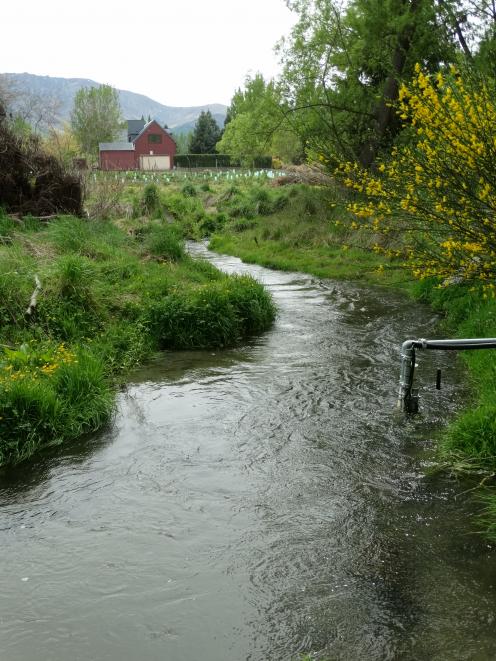 Mill Creek, near Lake Hayes. PHOTO: GUY WILLIAMS
A regional councillor has told a Friends of Lake Hayes Society member its "next steps are going to be better'' after the Otago Regional Council (ORC) approved a non-notified consent for work on the lake's tributary.

Cr Ella Lawton was responding to comments by Andrew Davis during the public forum at a council meeting in Queenstown on Wednesday.

Mr Davis told councillors the ORC's approval of the consent without community feedback was inconsistent with its recent promise to work with the community on the restoration of Lake Hayes and to step up water quality monitoring in the area.

"The ORC is on board ... and then we receive notice that a consent has been granted for a development directly on Mill Stream, the only tributary to Lake Hayes.''

In September, the ORC approved consents for the construction of six weirs, seven bridges and two culverts in and over Mill Creek, and for widening and reshaping the stream.

It would be dammed to create amenity ponds above the weirs, and flood walls would be constructed to protect historic farm buildings from an extreme flood event.

The work would be commissioned by Winton Partners subsidiary Waterfall Park Developments Ltd if it gains approval from the Queenstown Lakes District Council (QLDC) for a major hotel development on the site.

In April, the company applied for resource consent to build a ``four-plus star'' 380-room hotel, restaurants, wellness centre and conference facilities on the 58hectare site, which is about 3km southwest of Arrowtown.

Mr Davis said the work would cause the stream to be "significantly disturbed'' when its water quality and that of Lake Hayes was already "poor''.

Cr Lawton said the non-notified consents were for "in-stream work'' only, and if the QLDC granted resource consent for the overall hotel development, the regional council would work closely with it to protect the catchment's water quality.

"We will be putting in every possible [condition] we can to ensure there isn't an ongoing impact to Mill Creek and Lake Hayes.

"Essentially, we're in a situation where you guys are unhappy with what we've done.

"What we're promising is that the next steps are going to be better.''

The consents require Waterfall Park Developments to take "all reasonable steps'' to minimise the release of sediment into the stream.

Provided an earthworks management plan signed off by both councils was implemented following best practice, sediment discharge could be expected to be minimised, Ms Pritchard said.