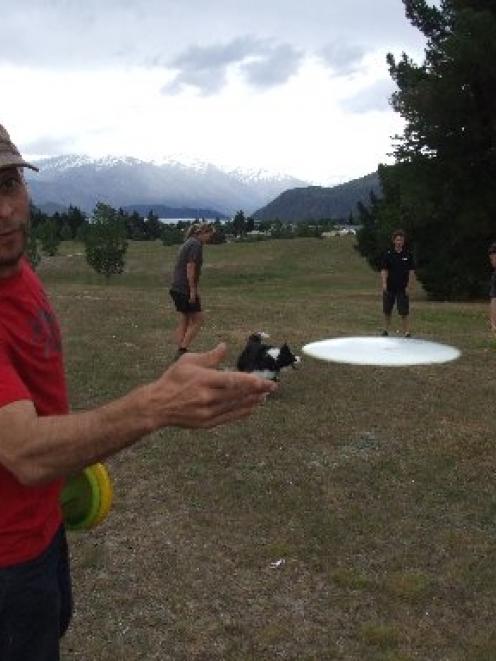 Wanaka disc golfers (from left) Martin Galley, Shannon Foley, Hazen Simson and Matt Gunn, alongside Blizzid the dog. Mr Galley says Lismore Park is a massive area which can be shared by many groups. Photo by Matthew Haggart.
Frisbee fans say a disc golf course at Lismore Park in Wanaka will better utilise the massive reserve, despite opposition from the Wanaka Residents Association, which claims the pursuit is too sporty.

The Wanaka Community Board decided at a meeting this week a proposal for an 18-hole disc golf course at Lismore Park should go out for community consultation.

Frisbee golf club spokesman Martin Galley told the Otago Daily Times yesterday he had been surprised at the level of opposition to the proposal when it went before the community board.

"This park is underutilised. It is a massive area, which can be shared by all sorts of groups," he said.

The Wanaka Residents Association representative said unsuspecting park-users would be susceptible to "high-speed flying missiles" and other "inaccuracies" common to golf.

He called for a more suitable park to be found.

After taking advice from parks manager Gordon Bailey and seeking information from Mr Galley, the board decided the proposal did not comply with the management plan and it should be notified for public submissions.

The board was also split on whether to support the activity or reduce the proposed course from 18 holes to nine holes.