By Guy Williams
0 Comments
Trout fishing in Moke Lake should be particularly good in 2023.

Otago Fish and Game released 500 juvenile rainbow trout into the lake near Queenstown yesterday, which is 200 more than usual.

Fish & Game field officer Steve Dixon said the one-year-old fish weighed only 30gm-80gm, but would grow to a catchable size in the next 18 months to two years. 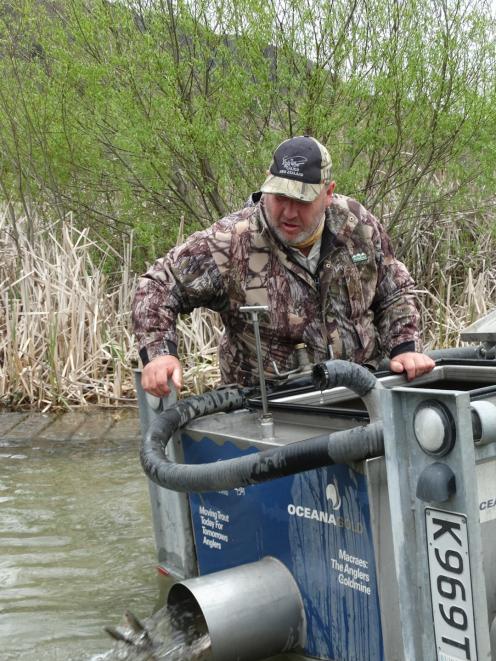 Otago Fish & Game field officer Steve Dixon liberates 500 one-year-old rainbow trout into Moke Lake, near Queenstown, yesterday. PHOTO: GUY WILLIAMS
It had released 300 trout into the lake every spring since 2004, because its tributaries did not have good spawning conditions.

Until last year it also released 200 trout annually in Lake Johnson, near Frankton.

However, the cancellation of an agreement on access for anglers to a privately owned portion of shoreline there meant those fish had been reallocated to Moke Lake.

The fish, raised at the Macraes Flat Trout Hatchery, were transported by Mr Dixon in a trailer with an oxygenated 500-litre water tank.

The hatchery, run by Fish & Game in partnership with mining company OceanaGold, raised about 8000 fish for release each year, he said.

‘‘We’ve also got about another dozen dams and reservoirs around Otago that we release fish into.’’

Moke Lake also had a small but self-sustaining population of brown trout, and was very popular for fishing ‘‘especially in the summer when the [Department of Conservation] camp’s full’’.

The fish releases are paid for with the proceeds of fishing and game bird hunting licences.