Flyer good to get head of steam 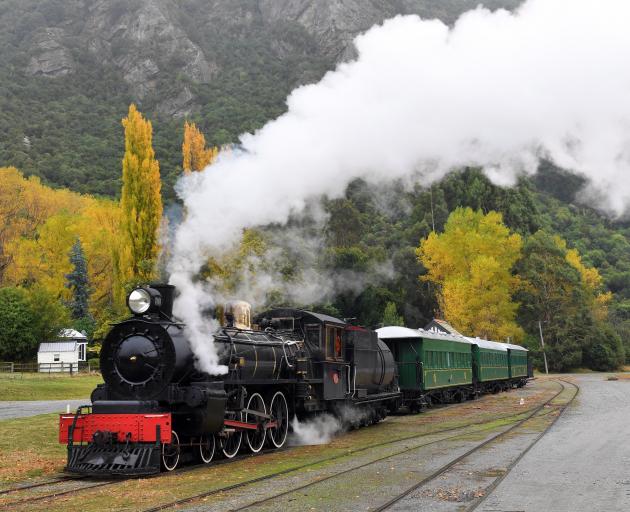 The Kingston Flyer goes through Kingston carrying its first paying passengers for eight years in April this year.PHOTO: STEPHEN JAQUIERY
The vintage Kingston Flyer is officially back on track.

The steam train’s owners can now commercially operate on the 14km Kingston to Fairlight railway for the first time since the previous owner mothballed it in 2013.

"It has been the result of an incredible amount of work behind the scenes by some really committed people."

Mr Simpson, who started with the Flyer in 1983, said it would probably operate only for group bookings this summer, rather than run to a schedule.

However, if it was booked on a Saturday, "we would probably do a run for the public on the Sunday as the engine’s still warm".

It had also been hired out for TV advertisements or filming.

Whatever happens, Mr Simpson was keen for a special excursion on about December 20 to mark 50 years since the then government-owned New Zealand Railways first ran the Flyer as a tourist venture.

"It’s just baby steps, but when we reach a milestone like this, it’s something to celebrate.

"Bringing it back from the brink has been a huge task, and to be able to begin this summer has made it all worthwhile."

The Flyer will use its one operational locomotive, AB795, which first entered service in 1927. The other, AB778, launched in 1925, still needs "complete restoration".

The loco will haul four out of the Flyer’s seven wooden carriages, providing capacity for about 150 passengers.

Three carriages had been restored so far and the fourth was halfway there, Mr Simpson said.

"We’ve still got quite a bit of track work to do, which hopefully in the next couple of months we get completed."

There’s a pool of people keen to staff the train, who’ll be put through training, as well as trained drivers standing by.

Mr Simpson dismissed suggestions it would not be economic because the previous owner, the late David Bryce, only ran it for two summers before mothballing it.

"The economics of it were actually going quite well ... David Bryce’s health was a big factor."

The current owners bought the train and about 80 adjoining hectares in 2017 and refurbished the Fairlight railway terminus, adjoining the Mataura River.

Down the track, as the borders opened, Mr Simpson said they would look at running a regular service again — the consent allows up to six returns trips between Monday and Friday and six at the weekend.

To mitigate the fire risk from sparks, the consent also specifies a light rail vehicle with a 400-litre water tank and pump follow the Flyer when the fire danger rating was at a "high" level or above.