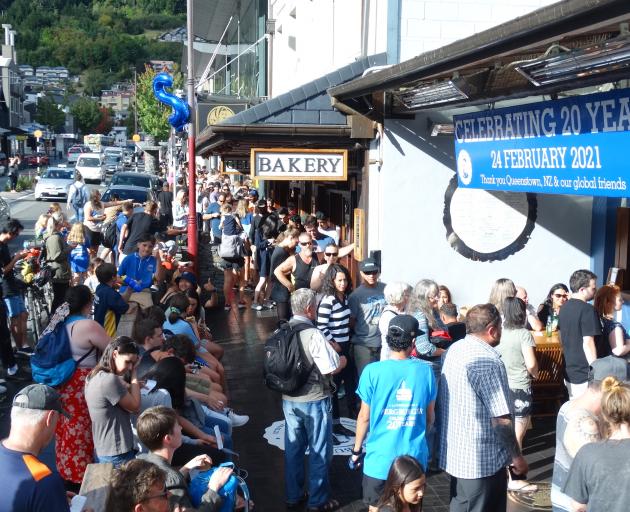 The business has been shouting customers its original Fergburger with cheese today to celebrate its 20th birthday - so long as they say 'happy birthday' to the staff serving them.

"It’s a fantastic milestone for us, and we just want to do something for everyone that’s been a part of it," general manager Steve Bradley said Monday.

Synonymous with the queues that used to snake down Shotover Street, pre-Covid, and its celebrity endorsements, it’s hard to believe Fergburger started in a ‘hole in the wall’ in dingy Cow Lane that staff could only access by clambering over its counter.

There was apparently a queue on the first day, but only one burger was served the following night, Bradley says.

It was started by reclusive local,  Ant Smith — originally with a partner — who’s still the owner.

The identity of ‘Ferg’ remains shrouded in mystery.

In pre-Facebook days, Bradley says it was bloggers who initially spread the word.

"There’s a story he said to a couple of people, ‘these are the best burgers, you’ve got to have them’, and they happened to be Jack Black and Adrien Brody."

But Fergburger really took off when it was embraced by Lions rugby players and supporters during the 2005 tour, after it had moved to Shotover St.

Over the past 10 years, it’s added the neighbouring Fergbaker, Mrs Ferg and, last year, Ferg’s Bar.

The empire’s cumulatively employed 1860 people, including about 1150 at Fergburger, who have clocked up 2.96 million operational hours.

Beyond that, they’ve also been good business for suppliers of everything from beef to eggs  to lettuces to T-shirts.

"Probably our favourite is the ‘gelato bikes to schools’ — we raise about $10,000 a year for schools."

Last year, they researched 17 New Zealand tourist icons and found Fergburger was No.1 for TripAdvisor and Google reviews, No.2 on Instagram and No.3 on Facebook check-ins.

However, with borders closed, last year was probably their toughest since their first year, he suggests.

"We got through last year without losing anyone, but we’re certainly now letting natural attrition take its course, and our numbers are dropping, strongly."

For the first time, Bradley admits they may consider "viable approaches" to franchise Fergburger — till now, their back-end infrastructure has not been in place.

The company originally had bigger plans for its 20th birthday, but Bradley says the current timing is not appropriate.

Best burgers in NZ regardless.