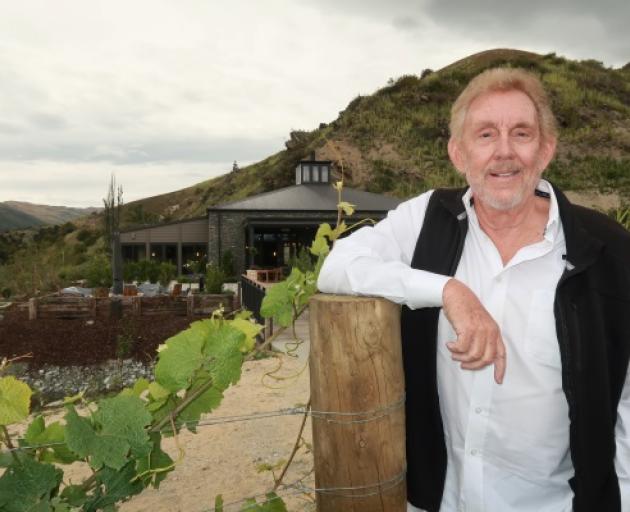 Having plonked about $50 million into Gibbston Valley Winery, American Phil Griffith calls himself the poster-child for foreign investment in New Zealand. He talks to Philip Chandler just weeks after opening his long-awaited lodge and spa, and on the eve of another winery-hosted summer concert.

The recent opening of Gibbston Valley Winery’s $25 million lodge and spa is a triumph for its low-key American owner, Phil Griffith.

Since first pumping money into the winery in the early former casino mogul’s punted big on the future of Queenstown’s wine tourism, and Gibbston, in particular.

Griffith, who only says “I’m over 70”, visited Queenstown in 1988, before a business conference in Australia, at the suggestion of friends.

He recalls taking a jetboat trip with Dart River Jet pioneer Neil Ross and helping push it off sandbars.

Brady convinced him to substantially fund his wine cave, in return for shares.

“Then I was on the hook, so to speak, because whenever they needed more money, I’d write another cheque.”

Around 2004, he was offered, and bought, 400 hectares off neighbouring farmer Jim Hunter, which became Gibbston Valley Station.

“I’d spent enough time in NZ, and Queenstown, to know that this was a country I wanted to spend time in, and invest in.

“I could see that this was going to be a really good tourism market.”

Starting life in a Kansas City orphanage, Griffith grew up on a poor farm, electricity only arriving when he was six.

Injury ruined his ambition to become a college basketballer, so he studied accountancy, then worked for Deloitte.

“Deloitte did all the work for [magnate] Howard Hughes, so I got to Las Vegas in 1970 and eventually Hughes hired me.”

Over the years, he acquired interests in up to 12 casinos, which mostly came with hotels and restaurants.

However he sold up in 2002 “casinos were spreading all over the United States, and you could see it becoming saturated”.

Meantime, he’d fallen in love with NZ and Queenstown.

However, by 2009, with the global financial crisis, Griffith says the winery was on the brink of going under.

“The bank was breathing down our neck so I went and bought all the other shareholders out.”

He also brought in Greg Hunt as his CEO.

“I said, ‘we’re going to start running it, but I don’t know anything about wine’.

Griffith, an original partner in Queenstown’s Wharf Casino, says “in 2010 I turned the corner and I became ‘in’ the wine business, not a rich guy that just invested in it”.

“Our goal was to in a sense expand, but we had to make the winery viable.

“It became successful enough to be able to then develop a lodge.”

He says they intended making it about a four-star venue.

“Then when we make 150 decisions along the way – given a choice, you’ll make five-star decisions, so you’ve got a five-star place.”

His only sadness is his wife, Dona, didn’t live to see it open – she died, after a long battle with cancer, in November the year before last.

With her native Italian flair for hospitality, she put her stamp on the winery, Griffith says.

Not well known is that the winery’s also half-owner of the company, Greenstone Entertainment, that puts on the annual summer rock concerts in Gibbston and the North Island.

“This 10th [this Saturday] will be the most successful one ever we sold it out in 10 days.

“I look at all the events here and there are none that put any more benefit for Queenstown.”

Looking ahead, Griffith says the next development stage, over the state highway, originally earmarked for a golf course, will focus primarily on bicycle tourism.

“At my age, probably my kids [Cristina and Alex] are going to be the ones that do it.”

He believes he’s the poster-child for foreign investment: “Over a long period I’ve become a resident, invested my money, never taken a dime out of NZ, always reinvested and been a really good citizen.”

The good people we want in NZ

Seems to have no qualms or social awareness of the plethora of lives that he must have affected/ruined in running these gambling insitutions. Casinos are merely a way to leverage money away from people who are unaware of how statistics work. If he thinks that running shops to take money from the poor, desparate souls who have only hope and dollars left is what constitues as a 'good citizen', then, well.

Great story but what a poorly written article. ODT, you should be ashamed.