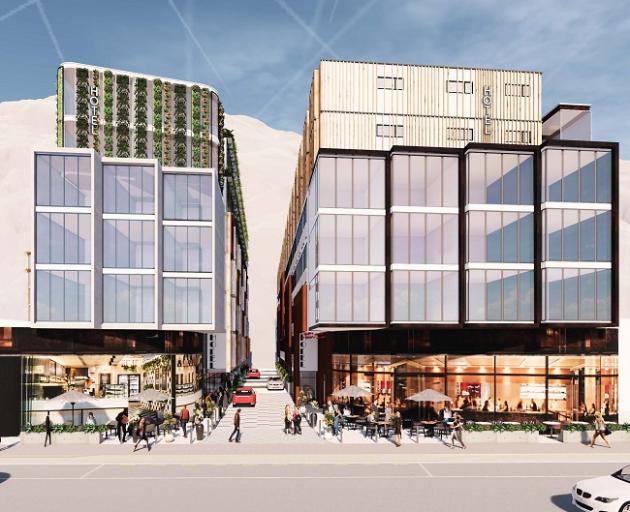 Major proposal: An artist's impression of the proposed two hotel buildings on Gorge Road. Photo: Supplied
Yet another Queenstown hotel development’s in the pipeline, with a mega new complex planned for Gorge Road.

The first hotel will feature 195 hotel rooms and 32 two-bedroom serviced apartments, while the second will have 205 hotel rooms.

They’d be in addition to more than 3000 hotel rooms that, according to council stats, are either under construction, consented but not yet built, or in the consenting process in the resort.

Commercial tenancies and food and beverage offerings will occupy the ground floors.

The site was previously pegged for a $30 million apartment complex, but that was scrapped in 2016 after backers determined it didn’t stack up financially.

Gapes is also the developer behind ‘The Alex’ apartment project on the Gorge Rd/Hallenstein Street corner.

He declined to comment on the new hotel application, which also includes a request for it to be not publicly notified. But the application states there are “a number of positive effects arising from the proposal”, including its proximity to the CBD and a positive contribution to the wider streetscape.

If it goes ahead, it’ll be another major change to the face of what’s currently a predominantly industrial part of the resort. Over the road on the old school site, a major housing development is understood to be in the works. An announcement’s expected on that in the near future.

Gapes’ consent application alludes to the changing nature of the road, acknowledging that while it’s currently “commercial/light industrial”, it’s “anticipated that the area will experience a transition from business to residential uses due to its designation as a Special Housing Area”.

The SHA designation will be revoked in seven months and, as of last weekend, there was only one party looking at any development within it.