Hut warden heard about Te Araroa trail, so doing it

Queenstown’s Eiji Kitai on Ninety Mile Beach. Photos: Eiji Kitai
A Queenstown man walking the 3000km Te Araroa trail says he was inspired by the many long-distance trampers who have stayed at his hut in the mountains.

Eiji Kitai, who spends five months a year  as warden of the Greenstone Hut in Fiordland National Park, said walkers from throughout the world had stayed at the hut while on the Te Araroa trail and he "got sick of listening to their stories".

"Always this thing has had a place in my mind."

After cancelling the journey in 2011 after a family illness, he set out from Cape Reinga on September 3. 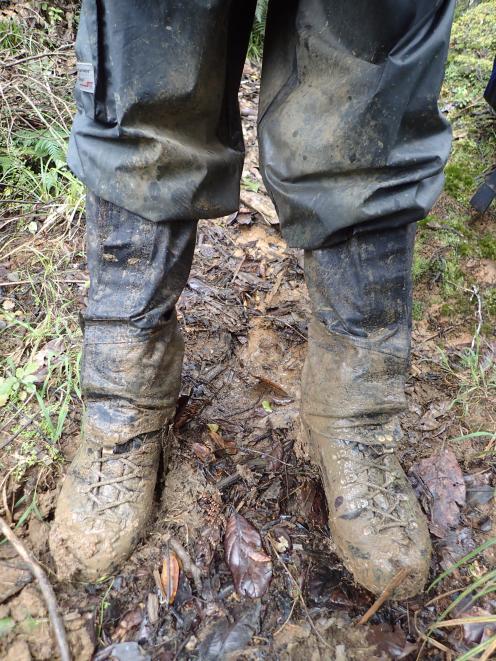 Covered in Northland mud after ‘‘terrible’’ weather.
His 50th birthday, which he celebrated on the trail last month, had also been a motivation.

"This is a big birthday celebration for myself."

Speaking to the Otago Daily Times from a tent pitched behind a cafe in Rangiriri, Waikato, Mr Kitai said he planned to complete the 1700km North Island leg in 62 days before returning south for his hut warden job.

However, he was behind schedule after "terrible" weather  had left the tracks muddy which made walking hard.

He was determined to at least reach the trail’s halfway mark — near Palmerston North — before going back to work.

He would then return in April and walk the remaining 1500km to Bluff.

Another camp in the ‘‘middle of nowhere’’.
Averaging 8-10 hours and 20-25km a day, he usually slept in his tent in the "middle of nowhere", but spent an occasional night at a backpackers or Doc hut.

His pack weighed between 22kg and 25kg.

"I’m carrying a lot of unnecessary stuff that I’m regretting."

The trail was "much, much harder than I imagined", he said.

But he was getting fitter day by day, and the track conditions were improving the further south he went.

"It’s been an amazing experience, every single day. There’s always something completely unexpected."

That included the kindness of strangers. A few days before, after finding the Ngunguru River too deep to cross, he got talking to a local who immediately offered to get his friend’s boat and row him across.

The man disappeared and returned an hour later with the boat and the friend.

"He said his wife had left him a week ago, and he was still in shock and didn’t want to work.

"He was just driving around the town looking for something to do."

Mr Kitai said he was keen for people following his progress to donate to the Routeburn Dart Wildlife Trust, a charitable group raising funds for predator-control efforts in the Routeburn and Dart Valleys and the Rees-Dart river delta.

"It’s a natural choice for me because I’ve worked in that area for many years, both as a trekking guide and as a ranger, so I’ve been wanting to give back something."