Lakes hospital to get upgrade 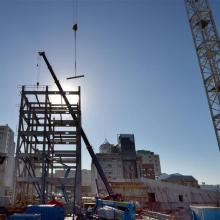 Photo from ODT files
The South's cash-strapped health board is pushing aside concerns over finances to pursue a long-awaited upgrade of Queenstown's Lakes District Hospital.

That puts to bed a long-running battle between community representatives and the board.

Queenstown health advocate Maria Cole said she was delighted, and supported any improvement to the town's health facilities and services.

But one long-time sore remains - whether the DHB should hand over the hospital to a community trust.

The board has embraced a Ministry of Health report, released yesterday, which recommends against the hospital's self-governance.

``As a community, because Queenstown is what it is, there is a very significant opportunity here to have the best regional hospital in New Zealand - and I don't believe, short of completely rebuilding the hospital, that we're going to get that necessarily under the DHB.''

The hospital upgrade, to be staged over two years, was a huge turnaround in the hospital's fortunes.

In September 2014 the board said it could not afford an upgrade because of the planned $300million rebuild of Dunedin Hospital.

Several wards, including the maternity ward, will be refurbished and a specialist audiovisual suite built, to allow telemedicine.

``You can't keep putting off decisions that relate to the healthcare needs of the region on the basis that it's financially too tough.''

Examples of the hospital's poor state were the fact the emergency department had no toilet and some ward doors were not wide enough to push beds through.

Mr Thomson said details would become clearer when a building assessment had been done. It was likely the hospital's footprint would be extended to house the CT scanner.

The prospect of a CT scanner was an acknowledgement the area was ``accident prone'', she said.

The news came too late for American Corey Docherty (23), who died after falling from the fire escape of a Queenstown backpackers in February 2015.

In February of this year, the ODT reported comments from Queenstown doctor Morne Pienaar, who told the coroner having a CT scanner at Lakes District Hospital would have made a ``substantial and significant difference'' to how Mr Docherty was treated.

The Ministry of Health report exploring the idea of a community trust owning and running the hospital said Queenstown seemed suited to a private-public partnership and noted the board - which expects to post a $34.2 million deficit for the last financial year - would struggle, in the medium term, to pay for the hospital's redevelopment. The board received the report, written by Sapere Research Group, a week ago.

Mr Thomson said: ``We obviously haven't had time in a week to think about exactly what models we might use. That'll be part of an ongoing conversation.''