No-one was injured in a blaze that gutted an internal garage in Queenstown’s Fernhill today.

A man who lived in a unit within the same building at Watts Rd, Fernhill, was believed to be the only person home at the time, and was able to run out of his front door, to the left of the fire, unharmed.

The man, who wished to be known as Craig, said he felt "all good" but said the fire was "crazy". 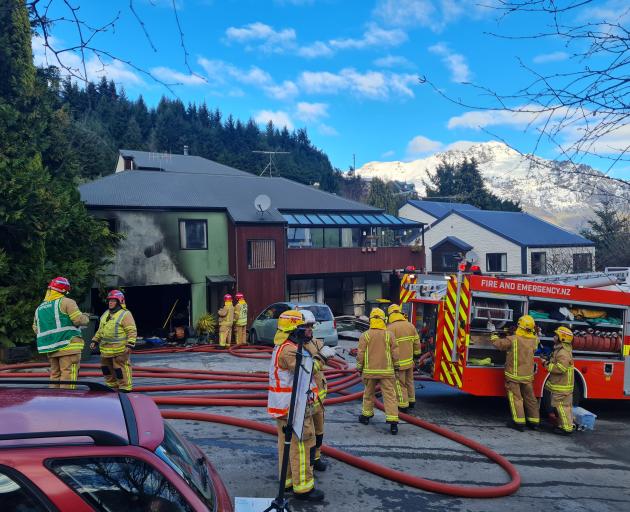 Emergency services at the scene of the fire in Fernhill, Queenstown. Photo: Cass Marrett

"I just smelled smoke ... there’s a little door between our flats, and I just saw it coming under the door, and then I ran outside and I could see it all coming from the garage," Craig said.

A neighbour said when the fire broke out a woman was screaming "fire" from the street and notified emergency services, which confirmed they received a call at about 1.55pm.

Five vehicles from Fire and Emergency New Zealand were in attendance along with about 25 firefighters.

A police spokesman confirmed police were at the scene providing traffic control and ambulance was in attendance but stood down because they were not needed, the spokesman said.

Queenstown fire brigade Senior Station Officer Dave Christie said the fire was not being treated as suspicious at this stage.

He said the extent of the damage was mainly contained to the garage but some damage had spread to other parts of the house.

"[A] wee bit up in one of the bedrooms ... of the unit to the side, smoke damage, the one on the back, completely fine," Mr Christie said.

A fire safety investigator was travelling from Invercargill to investigate the cause.