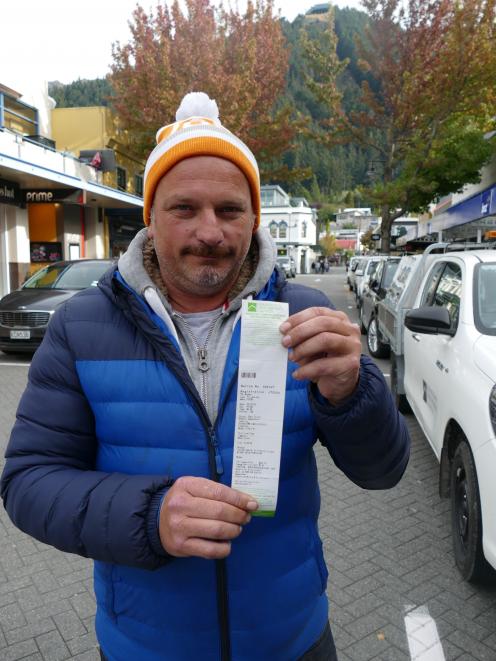 Arrowtown resident Glen Wallace and his fine for ``freedom camping'' on Rees St. PHOTO: GUY WILLIAMS
An Arrowtown man who received a $200 freedom camping fine after sleeping in his vehicle in central Queenstown overnight says it sends the wrong message about drink-driving.

After going drinking with friends on March 21, Glen Wallace found himself alone and "over the limit" about 4am.

Aware he was in no state to drive, he went to sleep in his ute, which was parked in Rees St.

After waking up to find the ticket on his windscreen, he got a friend to give him a lift home.

Mr Wallace said when he asked a Queenstown Lakes District Council staffer about getting the fine waived, he was told a "blanket rule" applied to freedom camping breaches and he would have to pay it.

In retrospect, he knew he should have stumped up $80 for a taxi, or checked into a backpackers, but thought sleeping in his vehicle was harmless.

"I'm trying to be responsible here, but I'm being punished for it."

Although he paid the fine, he felt as a longtime resident and ratepayer for 16 years, the council could have shown leniency.

"I don't mind that I got the ticket - that's fair enough - but I thought some common sense would prevail.

"I'm a ratepayer, I'm obviously not a freedom camper."

His biggest fear was the council's hardline stance could encourage people to drive drunk.

It was a fact of life people sometimes drank more than they planned, and found themselves stuck in town without arrangements for getting home.

In that situation, sleeping in your car was not a bad option, he said.

Anyone found sleeping in a vehicle overnight in a freedom camping zone could be fined.

The council had not discussed the issue with the police, but did not believe its stance conflicted with the anti-drink-driving message, Mr Hall said.

"We encourage people who want to drink, to do so responsibly and always make plans to get home safely."

Examples of when a waiver might be considered was when it could be proven an enforcement officer had been mistaken, or a medical emergency was involved.

To add to the local council sending the wrong message in regards to drink driving, they have now prevented the ability to pay for a parking ticket at night in preparation for the next day. So if you do leave your car over night in a responsible move, you return to your car in the morning to find you have a $40 parking fine. This town has a high rate of a DUI charges and like it or not QLDC you are a contributing factor. If someone is intoxicated in town and they cannot pay for a carpark ticket to cover the next morning, nor can they sleep it off (Not everyone has the money to taxi home or stay at a backpackers) then are you really surprised that an intoxicated logic sends a percentage of these people behind the wheel. Stop using excuses for all your money grabbing schemes and actively show your support to the local community by offering safe parking, offering the ability for locals to validate their parking the following morning by being able to purchase a ticket at night. THAT IS THE VERY LEAST YOU CAN DO. And if you really are sending out troops at the crack to ticket people, perhaps have the common decency to tap on that car window & give them an option before writing them up!

Parking fines and other infringements are a budget line (income) in council annual budgets. Councils know how much they should receive each financial year, based on actual past years, and courtesy or leniency do not help to achieve budget.