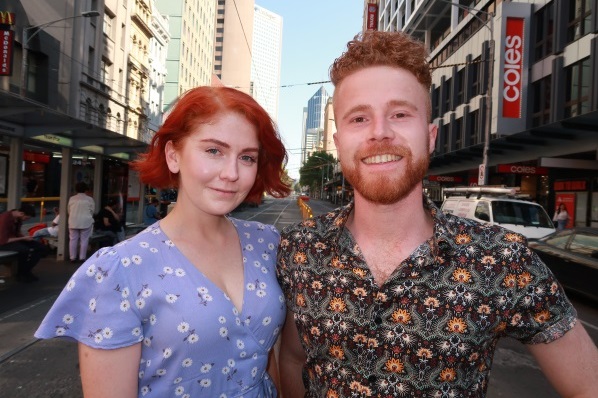 Isla and Finley Brentwood in Melbourne's CBD last month. Photo: Mountain Scene
Knock Australia, if you like, but it’s been the making of Arrowtown-raised Isla and Finley Brentwood, aka Brentwood Duo, who call themselves “Australasia’s only strictly ginger, brother-sister duo”. Philip Chandler broke from watching cricket in Melbourne last month to catch up with two Kiwi success stories.

It all started at The Fork and Tap, about seven years ago.

Arrowtown-raised singer Isla Brentwood had a gig booked at the local pub, but her guitarist bailed on her two days out.

So she messaged her brother, Finley, “do you reckon you could learn four hours of material in a couple of days?”

That became the first gig for Brentwood Duo, who then performed in other parts of New Zealand before moving to Melbourne in 2014, where Isla, 32, and Finley, 29, are nowadays a popular act.

They had the advantage of coming from a musical family mum, Kathleen, who’s a long-time performer in Showbiz Queenstown musicals.

After attending Queenstown’s St Joseph’s School, Isla and Finley attended boarding schools in Timaru and Oamaru, respectively, the latter also picking up the guitar between studies.

Isla then studied musical theatre at the National Academy of Singing and Dramatic Art, while Finley graduated from NZ Broadcasting School.

The latter then performed in several musicals, including the title role in Showbiz Queenstown’s Jesus Christ Superstar in 2014.

The siblings moved to Melbourne to find a larger pool to perform. Father Peter also hailed from there.

For their first 18 months or so, they set the ambitious target of uploading a song video on YouTube every week.

If their aim was to get noticed, they couldn’t have done better, as on “one random Sunday” in 2016 they found American actor Ryan Reynolds had shared their version of Deadpool Rap

Subsequently, his studio contacted them and they re-recorded the number for his hit movie, Deadpool.

On the back of that, the producers of TV talent show, X Factor Australia, asked if they’d like to audition.

Isla: “We actually said ‘no’, but they were like ‘just come and have a chat’.”

Not thinking they’d even get past the auditions, they ended up winning critical acclaim and a standing ovation, and making it into the final seven before being eliminated.

Isla says it was a “massive” five or so weeks – “you do have to say goodbye to your normal life for a while”.

Finley: “We look back on it in a positive light, because we got so much out of it, but there were some times when it’s just like ‘I hate doing this’.”

Such as when the producers tried to manufacture a conflict between them.

“One time, all we did was disagree with each other, and the Daily Mail Australia [news website] was like ‘Brentwood appear to be cracking under the pressure’, and it’s like ‘what the hell was that?'”

However, it sure helped their careers take off, and even today they get bookings from people who saw them on TV.

Now performing full-time, they get especially busy over summer, playing three to five gigs a week including weddings and corporate functions.

After X Factor, they released an EP of original music, and are planning to do more.

They’re also embarking on a project this year which they can’t talk about just yet.

“I mean, sometimes you do take it for granted, but it doesn’t take long for you to wake up a little bit and realise, in Melbourne and I’m able to do what I love full-time’.”

Asked about each other, Isla responds: “Fin has so much innate musical talent and is constantly surprising me with ideas and riffs.”

And Finley says: “Isla is the one I go to to check if something sounds right, she’s the one with all the training so I make sure I get her opinion.

“She has an excellent ear for our harmonies and, of course, she’s a great singer, too.”