A "dangerous" manoeuvre which led to two Queenstown skydivers being seriously injured on Saturday was probably unintentional, an industry safety expert says.

The Civil Aviation Authority (CAA) and WorkSafe New Zealand are investigating after two NZONE Skydive staff — named by the company last night as Sasa Jojic and Sasa Ljaskevic, both originally from Serbia — were injured in a tandem training jump that went terribly wrong.

The pair hit the ground at Drift Bay, south of Jacks Point, about 7.45am at "high speed", a police spokeswoman said. They were flown in separate Otago Regional Rescue Helicopters to Dunedin Hospital where they were "stable and improving", NZONE said last night.

NZONE, which ceased operations immediately but intends to resume business today, said in a statement on Saturday the injured pair were performing a "low turn at slow speed" while landing.

NZONE Skydive head skydiver and operations manager Sasa Jojic (top), of Queenstown, pictured with a client in this file photograph. Photo: supplied.
New Zealand Parachute Industry Association safety director Mark Horning, of the West Coast, said while only the injured men knew what happened, the inference from the statement was they planned the "dangerous" manoeuvre.

"If they were doing a low turn, I think it was an inadvertent low turn, because no-one plans to do a turn that low. You just don’t."

Intentionally making a low turn while landing was "like intentionally running your car off the road", he said, adding: "It doesn’t make sense to do that." 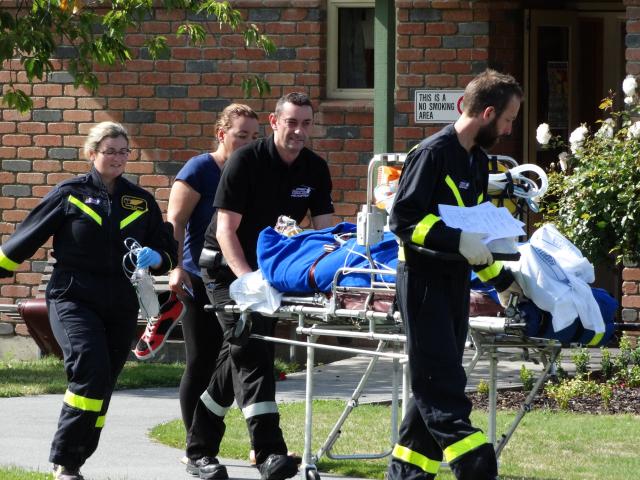 "Anything’s possible.  They could have been trying to avoid something. I don’t know enough to comment on that."

"But [it is] one that pilots perform depending on the circumstances of the day," he told the Otago Daily Times.

"As this incident is under investigation we are not in a position to comment further."

There was no footage to review because it was a training flight.

Mr Jojic is NZONE’s most senior instructor, a two-time Yugoslavian skydiving champion who joined the Queenstown company in 1997 and who has made more than 29,000 skydive jumps.

His stunts have included teaming up with a pro BMX rider and landing a bike after a 15,000ft tandem skydive. He is also known for "sky surfing", where skydivers wear a board attached to their feet.

Mr Horning said it appeared Mr Jojic — whom he had met — was the tandem passenger during the assessment flight.

"We go along in place of the passenger so that we can simulate situations that a candidate could find themselves in, and teach them how to resolve those potential problems and make sure that when they are jumping with members of the public that they know how to deal with any situation."

Mr Scott said the investigation would hopefully determine who was in control of the flight.

Neither of the injured men were involved in two 2015 incidents, three months apart, in which two NZONE staff were injured.

The company  was supporting family members of the injured men, Mr Scott said.

A family friend told the Herald On Sunday Mr Jojic’s wife was in Auckland when she heard of the accident and was rushing to Dunedin on Saturday night to be with her husband.

On Saturday, CAA spokesman Mike Richards said the pair  received serious injuries from the impact of their landing.

"It is too early to say what may have caused the accident," he said.

"The police, as first responders to the scene, are holding the parachute which may provide vital clues to investigators as to the possible cause of the accident.

"There is interest in the accident from both an adventure aviation and also a health and safety perspective, given the accident happened while staff were engaged in the skydive."

Investigators would be speaking to witnesses and interviewing the skydivers when they were able, he said.

Mr Horning said his association had offered assistance to CAA and NZONE and would follow the investigation closely.

A police spokeswoman said on Saturday the men impacted the ground at ‘‘a high speed’’.  An initial report  suggested they were travelling at 100kmh.

Photographer James Allan, who was at the scene, told the Herald on Sunday the skydivers landed about 50m from their usual landing place.

"It looked like they landed on a gravel road."

It is not clear if the incident could result in prosecution. The CAA is expected to provide an update on its investigation at noon today.