You could hear the shudders when word got out before Christmas one of Otago’s favourite sons, Sir Eion Edgar, had been diagnosed with one of the worst "Big Cs" - pancreatic cancer.

The Queenstown-based investor and philanthropist, who turned 76 two weeks ago, understands that sentiment: "I haven’t read a lot about it, but what everyone else has told me is it’s not the best card to draw out if you’re in the cancer pack.

"A lot of people always do think the worst, and particularly when they hear it’s pancreatic cancer.

"But, look, a lot of people have beaten all cancers, and I’m intending to do the same."

This man, who’s fought for so many good causes, including health-related ones, might be fighting the battle of his life, but he’s not surrendering.

In fact, he fervently believes the disease has chosen the wrong person.

"The little bugger didn’t know who he was taking on.

"Look, I’m going to give it a good fight; why wouldn’t you?"

Attitude’s a lot of that, he says.

"I mean, why not be positive?" 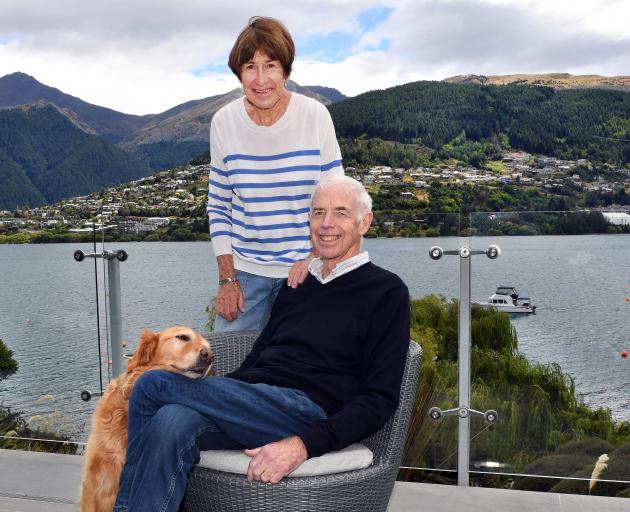 His left arm is extended as he receives an infusion of vitamin C, which he’s getting three times a week.

"Vitamin C is an acid, and it’s hopefully combating and knocking back the cancer," he explains.

It’s just over two months since he got his diagnosis.

Till then, he admits he’d led a charmed life, health-wise.

"I’ve never had any major health problems apart from having two new knees seven years ago, but apart from that I’ve been so fortunate, so very privileged."

The first signs something was awry came in early December when, at two big dinners in Wellington and Auckland, on successive nights, he didn’t feel like eating.

One of his sons suggested he had a stomach bug but recommended he see a doctor.

The doctor said, Sir Eion recalls, "I don’t like it, you’ve lost weight and you don’t want to eat. I think you should have a scan".

After flying back to Queenstown, he got a scan at Lakes District Hospital which showed a large lump on his pancreas.

"It was a big surprise. I’m not sure how long it had been there but it seemed as though it had moved quite quickly."

Taking advice from "very good advisers", he then had an MRI scan two weeks later in Auckland which found the cancer had grown and was now in his liver.

As a result, he couldn’t have surgery, "[be]cause it was too close to arteries", and chemotherapy would be too risky.

Sir Eion says he’d have refused chemo anyway — "why would you want to have the pain and unpleasantness of that, when you can enjoy life?"

But he did get keyhole surgery "to short-circuit the system so I could then be able to eat".

"That was my biggest problem — I couldn’t eat and you just kept blocking up and then you want to be sick."

His family then referred him to another doctor who suggested he try vitamin C.

"I rang the oncologist and he said exactly the same: ‘you’ve got nothing to lose. We can’t suggest anything else’."

Speaking this week, Sir Eion says, "to date, I don’t seem to be deteriorating, so I’m very pleased".

Asked if he’s contemplated meeting his maker, he replies: "Look, when you get to our age, you always think about those things. But look, I’m feeling good.

"I’ve had a great innings, but I feel there’s a few more fights to have yet.

"There’s a few things I want to make sure get finished, and advanced."

One example is a plan to save the financially strapped New Zealand Sports Hall of Fame, of which he is patron.

He would like it relocated from the Dunedin Railway Station to the city’s indoor sports venue, the Edgar Centre, which he helped set up.

Next week he’s off to Auckland to watch the Prada Cup but he’s also got upcoming functions relating, appropriately, to two health charities he fosters.

He’s heavily involved with both the Edgar Diabetes and Obesity Research Centre and the Dementia Prevention Trust, his family having contributed $1million to both.

Next Tuesday, at Parliament, he says the findings of a diabetes research programme will be released, showing preventing diabetes costs only a fifth of what dealing with the consequences does.

Then in Auckland, later this month, the dementia prevention trust’s being relaunched — its aim is to delay the onset of dementia by five years.

Still on the health front, Sir Eion confirms his wife has had mild Parkinson’s for the past six or seven years, "but she’s handling it remarkably well, and she’s stepping up over this".

"I made a great choice when I got married. You’re very lucky if you get that one right."

Remarkably, he says all but one member of their original wedding party attended last weekend’s 50th anniversary celebrations.

Sir Eion adds: "We spent a lot of time bringing up our children, and they’ve turned out well because we put the time and effort into them."

His sons, Jonty, Hamish and Adam, and his daughters-in-law, all based in Auckland, "have been absolutely fantastic".

"One or the other have been here most of the time with us since we got back to Queenstown [on December 29].

Sir Eion says the support he’s had from the wider community has been "embarrassing".

"People have been very kind.

"I’ve had some lovely letters from a variety of people from the Governor-General downwards."

And when it comes to unfinished business, he’s very keen to be around for his eight grandchildren’s 21st birthdays.

Since the oldest is still only 14, you can see he plans on sticking around for a while yet.