Night lights have gone on the murals at Waimate’s landmark silos and another mural has been completed at the site.

Artist Bill Scott’s mural of well-known Waimate woman Stella Chamberlain has been added to his other paintings at Transport Waimate’s premises but unlike the other works, this one has not been done on the silos but on the wall of an old flour mill at the site.

Mrs Chamberlain, who died in 2014, was a stalwart of the Waimate Rugby Club and washed the senior team’s jerseys for 39 years.

The mother of 13 did it the old-fashioned way.

First she soaked them in the bath, then washed them by hand and put them through a wringer. 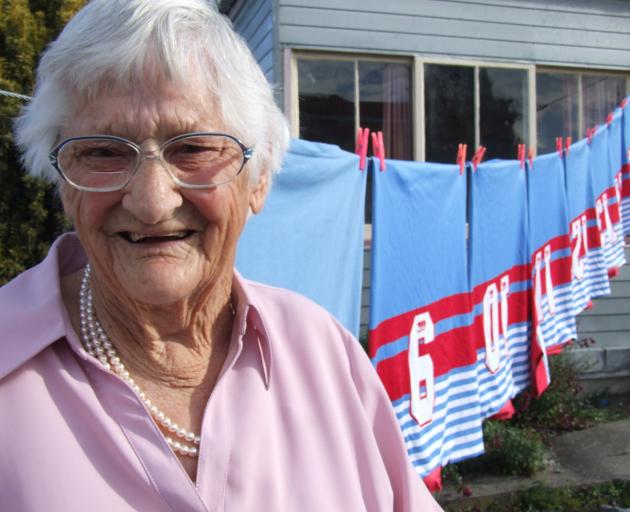 Stella Chamberlain, who died in 2014, was a stalwart of the Waimate Rugby Club and washed the senior team’s jerseys for 39 years.. Photo: Sally Rae

‘‘She was one of those ladies who toiled away in the background,’’ Mr Scott said.

When interviewed at the time, Mrs Chamberlain said she washed the jerseys ‘‘for the love of it’’, and because she had always loved rugby.

‘‘That’s her son Barry’s jersey. He was a hooker and works for Waimate Transport,’’ Mr Scott said.

Transport Waimate owner Barry Sadler and his wife Leanne have led and paid for the artwork project which, with Mrs Chamberlain’s mural, is now completed because they have run out of space. 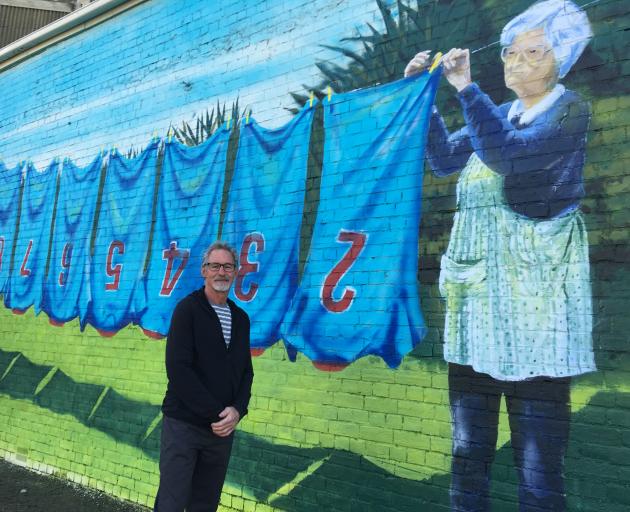 ‘‘Leanne came up with the whole idea,’’ Mr Sadler said. ‘‘It’s a way to celebrate people who have contributed.’’

Mr Sadler would not disclose how much the project had cost other than saying it had been ‘‘a lot’’.

‘‘We had to buy another section in Queen St to put in a walkway and I bought the machines for the silos.’’

These were hoists which allowed Mr Scott to achieve the difficult task of painting on the silos.

‘‘Initially, I was very aware of the height factor but I got used to it,’’ Mr Scott said.

Recently, Mr Sadler installed lights at the top of the silos. Last week they went on for the first time so the murals can be seen at night. The lights had ‘‘added something special’’, Mr Sadler said.

‘‘But I’m not looking forward to what my power bill will be.’’