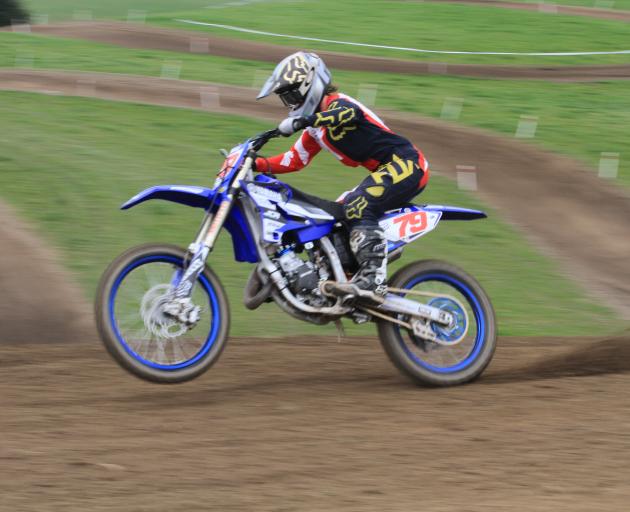 Roma Edwards (16) rides to victory in a round of the New Zealand Veteran and Women’s Motocross Championship near Timaru at the weekend. Photo: Hamish MacLean
Roma Edwards (16) admits she did "not really" know who Carey Hart was.

But she admitted the American freestyle pioneer and motocross legend, who  raced in the New Zealand Veteran and Women’s Motocross Championships in South Canterbury at the weekend, was "cool". 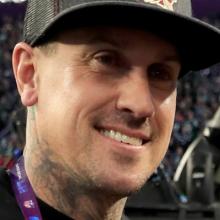 Carey Hart
"Mum was fan-girling over him," the Motueka teen  said.

Meanwhile, Roma was busy leading her class, women’s 12 to 16 years. The attendance of Hart, who is also superstar singer Pink’s husband, was "a big deal" for the event, race convener Noel May said.

The following day it was official, and Hart’s celebrity status resulted in the kind of publicity money could not buy.

Media attention spiked and up to 1000 fans  came through the gates to the race at the Southburn farm when organisers had been expecting a "couple of hundred".

Food trucks sold out and "a whole new crowd of people who had never seen racing" came out to see Hart.

Carey Hart races at the New Zealand Veteran and Women’s Motocross Championships south of Timaru on Saturday. Photo: Instagram
Hart, a "regular bloke" who like the 143 other riders was "just passionate" about the sport, showed up at 7.30am on Saturday and stayed for a "refreshing skid" in between hotels and airports while on the road with his family.

With his wife and children leaving the South after Pink’s show in Dunedin on Saturday night, Hart did not race yesterday. He told his 862,000 Instagram followers

he "had so much fun racing today" after Saturday’s race, but yesterday’s racing "wasn’t meant to be".

"It’s great to see motocross alive and doing well in New Zealand. Can’t wait til the next time."

For the record, the jetlagged American managed two fifth placings and a 10th in the men’s 40-44 year class.