Say ‘cheese’ and you’re a star 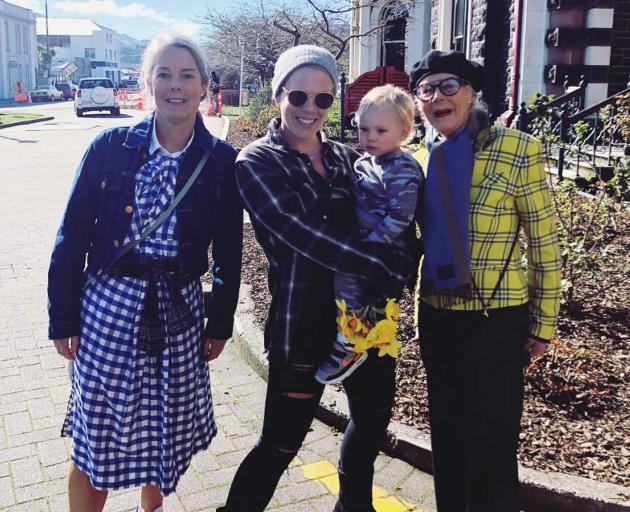 Pink and son Jameson Hart stop fashionable Dunedinites Harriet (left) and Barbara Brinsley for a photo at the Dunedin Railway Station on Saturday. Photo: Instagram
These days an elegant Dunedin mother-daughter pair cannot even buy cheese without being photographed by pop stars.

Barbara Brinsley  was unaware she and daughter Harriet would be catapulted to internet stardom when visiting the Dunedin Farmers Market on Saturday morning.

"I was just getting my usual cheese," Mrs Brinsley said.

But while there her daughter spotted Pink, who was also visiting the market with her son, and approached the pop star to get a photo with her.

Harriet was politely waved off by a bodyguard, and the two went on their way.

However, as they walked back to their car, Pink’s  entourage caught up with the pair.

It was now the singer who wanted a photo.

"They approached us because they thought we were very stylishly dressed," Mrs Brinsley (79)  said.

She was wearing a "daffodil yellow" checked Jean-Paul Gaultier jacket, a beret and yellow plastic boots, while Harriet wore a gingham dress.

"She asked if we were fashion designers. I said I was a nurse and this is my daughter," Mrs Brinsley said.

One of Pink’s crew took a picture on the singer’s phone, and another on Harriet’s, and then they were off.

Pink later posted the picture of her, her son and the Dunedin pair on Instagram. By  last night the post had 270,000 likes.

Mrs Brinsley said she did not use the internet, nor did she need the constant praise of others.

"I’m satisfied within myself. I’ve got more to do with my life than look at that."

While she would not know Pink if she "tripped over her", she seemed very nice in their brief interaction, she said.

As for the clothes which caught the singer’s attention, Mrs Brinsley said they were all second-hand.

"So it’s not off the top shelf ... I always go out reasonably well dressed."