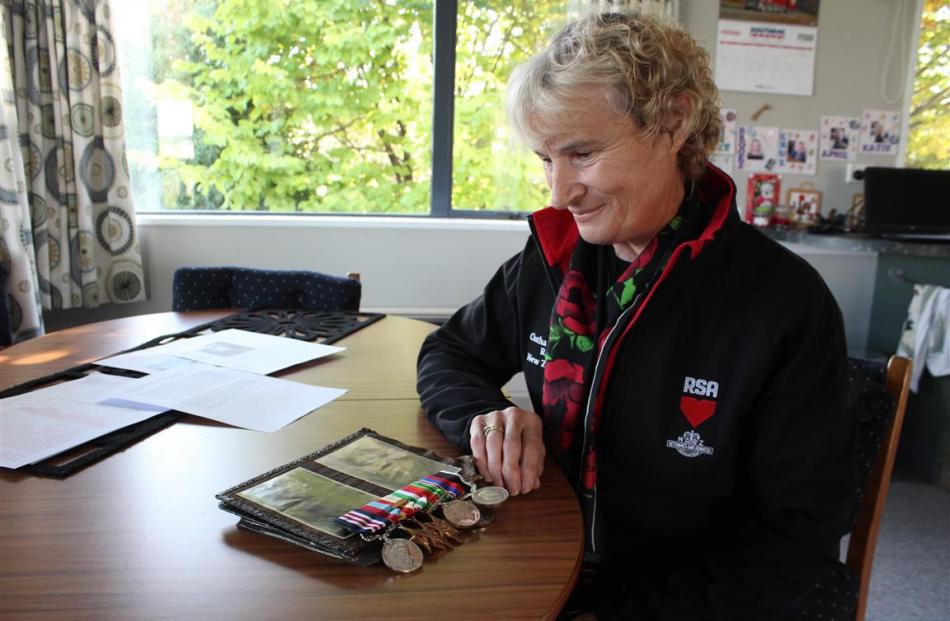 Balclutha RSA treasurer Pauline Soper, who will travel to Italy to lay a wreath alongside the Australian Embassy as part of Anzac day commemorations, contemplates the medals her father was awarded. Photo by Samuel White.

Two Balclutha women have been formally invited to take part in the wreath-laying ceremony for Anzac Day in Rome, in Italy.

Balclutha RSA treasurer Pauline Soper and friend Karyl Robertson, from Lawrence, planned an overseas trip at the time of Anzac Day and investigated what commemorative events were taking place in Europe while they were there.

Mrs Soper made contact with the Australian Embassy in Italy, which invited her to take part in the wreath-laying ceremony at Cassino and the pair to join the Australian ambassador at the embassy afterwards.

‘‘By doing that we can commemorate all the soldiers who died,'' Mrs Soper said.

‘‘It will be really quite special.''

While Mrs Soper would represent the Clutha District RSA, she also had a personal tie to the Italian area they were visiting.

Her father, Lance-corporal Allan Wilson, fought in the Battle of Monte Cassino in World War 2.

‘‘Cassino has always been the place I've wanted to visit.''

Her father was an engineer and helped construct bridges during the war.

He was awarded the Military Medal for his efforts following the battle at Cassino.

The citation for his award said he cleared a way through minefields for the infantry patrol to follow and, thanks to his reports, plans were successfully completed.

He showed ‘‘considerable courage and initiative'', it said.

Mrs Soper was completely fascinated by the number of New Zealanders from the Otago region who fought in the battle.

She and her friend had mapped out where all the New Zealand graves were and planned to place a poppy on each one.

Mrs Soper looked forward to seeing where her father fought in the battle.

She and Mrs Robertson will leave New Zealand on April 20 and expect to arrive in Italy on April 23. They will spend a few days at Cassino.