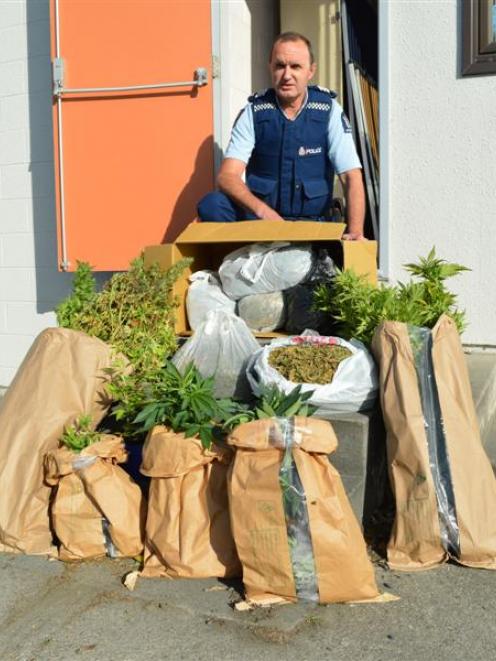 Detective Sergeant Stan Leishman, who is relieving in Balclutha, with the cannabis recovered from three South Otago houses this week. Photo by Helena de Reus.
Police seized more than 4.5kg of cannabis and cannabis plants with a potential street value of $200,000 in a drug bust in South Otago this week.

Detective Sergeant Stan Leishman, who is relieving in Balclutha, said about 10 officers, including members of the tactical crime unit in Dunedin, carried out search warrants at three houses in Milton, Kaitangata and in the Lawrence area.

They recovered more than 4.5kg of cannabis, 68 cannabis plants ranging in maturity, a ''significant amount'' of cannabis oil and a range of indoor growing equipment.

Each indoor plant had the potential to fetch just over $3000.

''For this area, this is quite significant.''

''We are confident the work that we did yesterday [Thursday] will have an impact on the availability of cannabis in the South Otago area.''

A 31-year-old Kaitangata man was charged with cultivating cannabis and possessing cannabis for supply, and is due to appear in the Dunedin District Court on Thursday.

Police will speak to three other people in relation to the operation, Det Sgt Leishman said.

The last significant drug bust in South Otago was in May 2012.

The outdoor cannabis growing season was still ongoing, harvesting set for between now and early May.

Police were interested in information about people and activity in forestry areas across South Otago. Det Sgt Leishman encouraged people to use the Crimestoppers number, 0800-555-111, to report any suspicious activity.